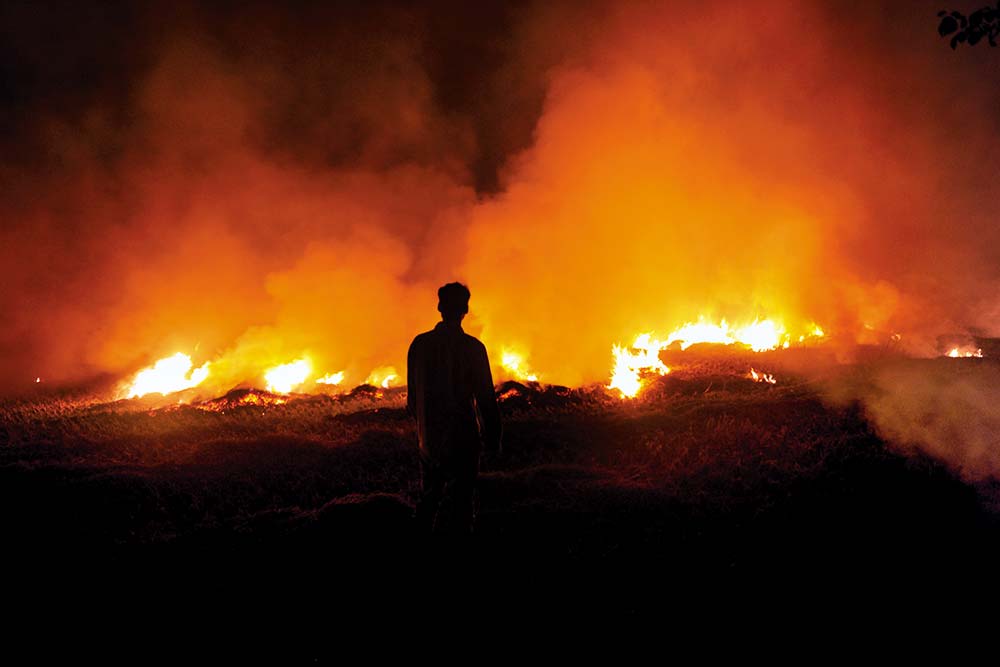 Winters have become synonymous with high pollution levels in the national capital being made worse by crop stubble burning in neighbouring Punjab, Rajasthan, Haryana and Uttar Pradesh. Thou­sands of farmers set their fields on fire. Law enforcement agencies attempt to control this by enforcing penalties. Yet, fields continue to be set on fire. There were 73,883 incidents of stubble burning in Punjab alone between September 21 and November 14, 2020 (Punjab Remote Sensing Centre, 2020). This is the highest number of incidents since 2016.

The government has rolled out a slew of subsidies and incentives. These have also failed to bring about a change. Farmers complain of problems with the efficiency of machines, their availability and high cost. This August, the Punjab government reported to the Supreme Court that it has not been able to provide cash incentives to farmers, owing to Covid-related financial constraints.

Despite the inadequate assistance to enable farmers to make the transition from stubble burning, the government has continued to penalise them. It is reported that this November in Punjab over 190 FIRs were filed and fines of up to Rs 40 lakh were imposed on farmers for burning crop residue. In the same month in Uttar Pradesh over 1,100 FIRs were lodged against farmers for stubble burning. Farmers have been arrested for this as well. Penalties were also imposed last year. Yet, farmers have not been deterred from the practice.

Why have all these measures failed? Poor and inconsistent implementation is one of the reasons. Penalties are imposed but not collected. For instance, out of the Rs 6.09 crore environmental compensation imposed on farmers in Punjab during the paddy season in 2019, only Rs 70,000 had been collected by December 2019. Thereby, penalties lose their deterrent effect.

Crop stubble burning violates farmers’ right to life as much as that of people living in neighbouring cities.

A much more important factor, however, is the lack of acceptance of solutions by farmers. The top-down approach and lack of consultation with farmers has played a key role in the poor implementation of viable solutions to stubble burning. The lack of inclusion of stakeholders in environmental decision-making is a problem evident across a number of spheres, from agricultural reforms to the setting up of development projects and the practice of environmental impact assessments in the country. The ongoing protests by farmers over three farm bills is testament to the failure of the inadequacy of such an approach.

This accompanies the deeper problem of the us versus them narrative that emerges every winter as crop stubble burning commences. The accused are the farmers and as Delhi’s air quality worsens, this narrative becomes stronger. In the midst of the blame game and finger-pointing, it is forgotten that farmers and their immediate community are the first sufferers in relation to air pollution, as well as impacts on soil and water which effect their lives and livelihoods. The impact of crop stubble burning violates their right to life as much as that of people living in neighbouring cities and states. The intergenerational impacts of this practice on the farming community also gets neglected. Environmental degradation owing to the unsustainable agricultural practices that have led to this practice will have impacts across generations. Farmers are as much victims as are the residents of neighboring towns.

What is more, they are victims of bad policies. Agriculture needs to be practiced and developed on the basis of the environmental conditions of that particular area. The Green Revolution pushed Punjab and its neighbouring states into a model of agriculture that was not sustainable. Prior to the Green Revolution, paddy was not a major crop grown in the region. It has been found that from a mere 1.7% cropped area of paddy in Punjab in 1973, the area under paddy cultivation expanded to 36% in 2013. Paddy procurement at the minimum support price further popularised it among farmers. Paddy is highly water-intensive, which has led to depletion of ground water in Punjab and Haryana. These states are now facing a severe water crisis. As per data provided by the Central Ground Water Board (2011) and the department of irrigation of Punjab, out of one hundred and thirty-seven blocks of the state, one hundred and three are overexploited, five are critical and four are semi-critical. There are only twenty-five blocks in the safe category. A similar situation is found in Haryana. Dark zones or over-exploited zones have been increasing across the state.

Various studies have also documented the connection of crop stubble burning with the change in agricultural patterns in this region. A 2018 study co-authored by NASA scientist S. Sarkar found that the practice started in 1986 owing to the introduction of mechanised harvesting for wheat (April-May) and paddy (October-November). A study by scientists from Harvard University published in 2019 corroborates this.

Stubble burning is a symptom of a much larger problem. It can be solved through an community-based plan of action.

Paddy residue left by harvesters takes about one and a half months to decompose, which does not leave enough time to sow the next crop, which is wheat. Stubble left on the field due to mechanised harvesting can be quickly cleared through burning. This reduces the harvest to sowing transition from the monsoon (kharif crop) to the winter (rabi crop). Thus, the 2019 Harvard University study states that along with mechanised harvesting, intensification of paddy cultivation in Punjab has contributed to an increase in the incidents of stubble burning. A study led by scientists from NASA and Columbia University found that rice production in North Western Punjab increased by 25% between 2002-2016, and that there was a concurrent increase of 60% in agricultural fire activity during the same period.

A matrix of problems has been created through the implementation of a poorly thought-out agricultural policy that failed to take into account the environmental factors and conditions of the area. Crop stubble burning is but a symptom of this much larger problem. It can be solved only through an integrated, holistic, community-based approach, which recognises the interdependence of the well-being of local communities and the health of ecosystems. Active community engagement is a vital element of formulating effective solutions and frameworks for the management of natural resources. The application of such an approach would enable the farming community to feel a greater sense of ownership of the process of transition to more sustainable agricultural practices. Panchayats can play a key role in this. In fact, in villages where panchayats have passed resolutions against stubble burning with the cooperation of farmers, incidents of stubble burning have not been reported. A bottom-up, multi-stakeholder app­roach that engages the community effectively needs to be encouraged.

One can then hope to arrive at solutions that address the entire matrix of environmental challenges and thereby resolve the problem of crop stubble burning.