Caught between aspirations of loyalists and new entrants, Shivraj Chouhan will have to walk the tightrope as he assumes charge as MP chief minister 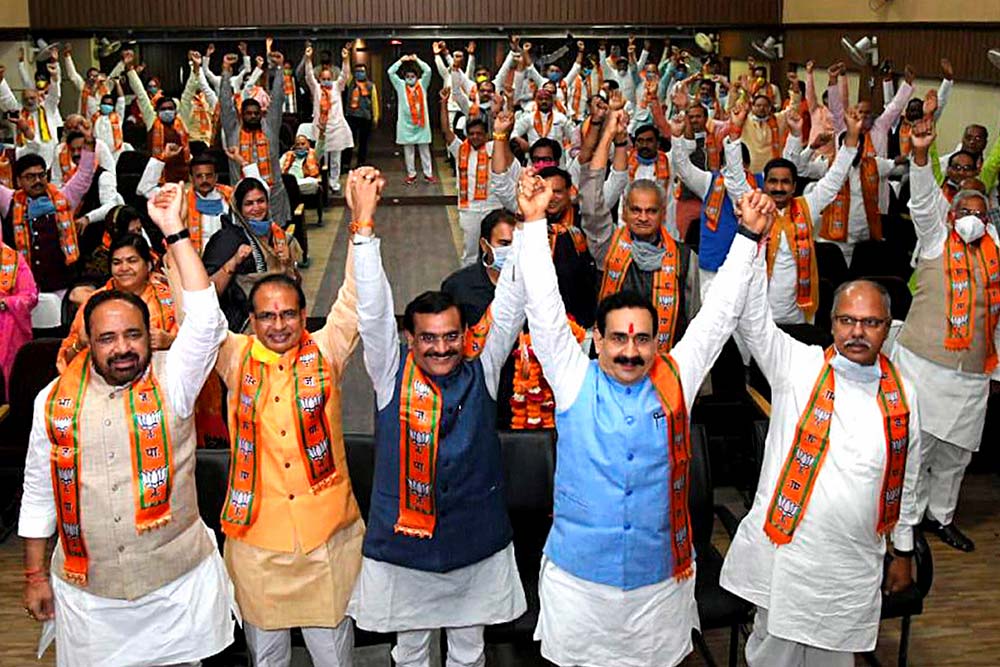 The Comeback Man
Shivraj Singh Chouhan after he was sworn in as the Madhya Pradesh chief minister
Photo by PTI
Puneet Nicholas Yadav March 27, 2020 00:00 IST Shivraj Singh Chouhan's Biggest Challenge - How To Manage Jyotiraditya Scindia And 22 Other Congress Rebels

After a 15-month interlude, the BJP maneouvered its way back to power in Madhya Pradesh on March 23 with Shivraj Singh Chouhan sworn in for the fourth time as chief minister. That the BJP’s return to power in the state it ruled for 15 years from 2003 to 2018 was not on the back of a popular mandate but one aided by rebellion within the Congress is public knowledge. Earlier this month, erstwhile Gwalior royal Jyotiraditya Scindia ditched the Congress to join the BJP and triggered a rebellion by loyal MLAs against Chouhan’s predecessor, Kamal Nath.

For nearly a fortnight, Nath and Congress veteran Digvijaya Singh made desperate efforts to win back the rebels. Singh, along with a dozen party leaders and ministers in the Nath government, went to Bangalore to “rescue the legislators held captive by the BJP” at a resort but was detained by the Karnataka police. Governor Lalji Tandon demanded that Nath prove his majority through a floor test in the Vidhan Sabha but the CM dithered, arguing that the 22 MLAs must first return to Bhopal. The now familiar...