Puppetry Of The EVM Vaccine

‘Politicisation of the virus’ may not be a bad thing. It could mean people’s health finally getting the space it deserves in public discourse. 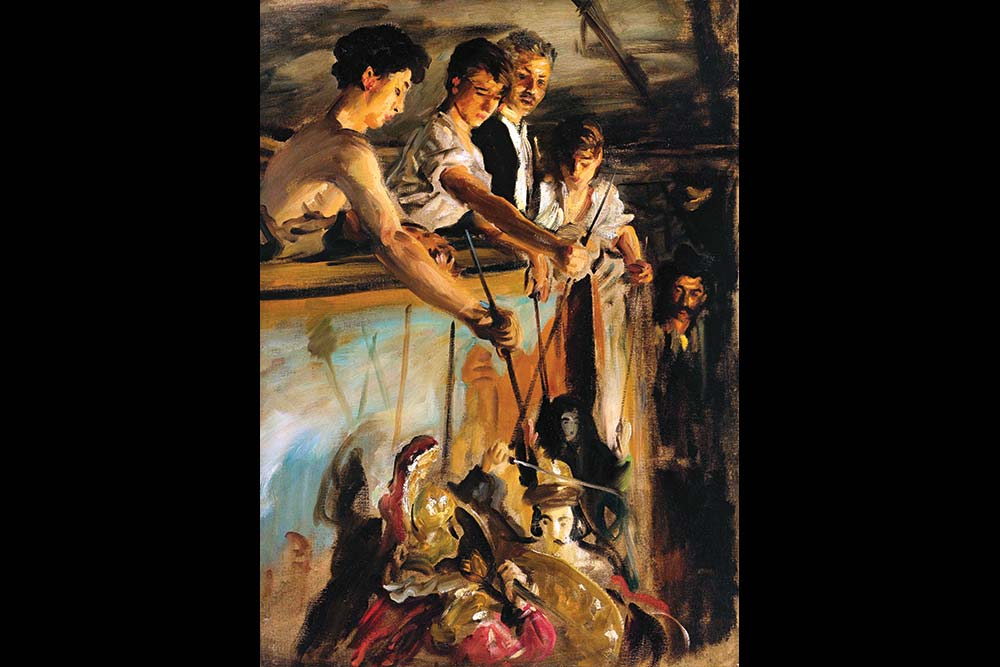 Marionettes, Behind the Curtain by John Singer Sargent

In a country where political parties have promised voters all kinds of freebies—­ranging from mundane chappals to the intangible WiFi—pledging a free vaccine in the time of a pandemic almost seems like a justifiable gesture. However, when finance minister Nirmala Sitharaman announced free COVID-19 vaccination as part of the BJP’s manifesto for Bihar, other political parties cried foul, saying the ruling party was using the pandemic for political gains. Some states like Tamil Nadu and Madhya Pradesh were quick to join the race and announced free vaccination, making it difficult for other state governments to charge for the vaccine, whenever it is cleared for use after the necessary trials.

Other states and Union territories are being cautious and not willing to join the ‘free vaccine’ chorus. Maharashtra health minister Rajesh Tope says they want to wait for the vaccine to come to the state first and then decide on the cost. “The cost factor would be ­discussed once the vaccine comes, but it will definitely be subsidised,” he adds. Delhi chief ­minister Arvind Kejriwal too has desisted from making a commitment on offering free vaccination. “Why only Bihar? The entire country is ­facing the corona ­pandemic. Everyone has a right to free ­vaccines,” he told mediapersons in response to the BJP’s ­announcement. When asked whether his government would also give it free, he said: “We will see when it comes and how much it costs, and then decide.”

As a policy decision, even the BJP is not ­willing to go beyond Bihar as of now. National general secretary and BJP in-charge Bhupender Yadav says vaccines will be made available to all citizens at a nominal cost. It is upon the states to make it free for their people. “In Bihar, we will,” he asserts. The BJP leader does not see anything wrong in promising free vaccination to all. On the other hand, he ­believes, it will have a positive impact. “It is a matter of public health and it is high time it ­became a policy issue. If farm loans can be an issue, then why not health? If a government can waive off farmers’ debts, then why ­cannot it give a free vaccine that will not only save the person who is administered the vaccine, but 10 others as Covid spreads so fast. ‘Zindagi bachaane ka kaam Sarkar ka hai’ (It is the duty of the government to save lives),” says Yadav.

Moreover, the Covid vaccine will not be the first vaccine administered free in India. There are more than a dozen others that are given free under the Universal Immunisation Programme, including vaccines to combat ­rotavirus, rubella, polio, Japanese encephalitis, measles, hepatitis B, meningitis and ­pneumococcal pneumonia.

The Election Commission also cleared the BJP, stating that the promise of free vaccine did not violate the model code of conduct, and that it was a welfare measure that the State could dec­ide on as per the Directive Principles of State Policy in the Constitution. The complaint was that the promise of free vaccination was “discriminatory and a misuse of powers by the central government during ­elections”, but the EC did not concur.

Public health policy experts believe that the issue of Covid vaccine did not get politicised after the BJP announced it as a poll freebie in Bihar, the state that witnessed one of the worst post-lockdown migrant crises. “It became ­politicised the day ICMR (Indian Council for Medical Research) pushed for fast-tracking of clinical trial approvals of Covaxin, aiming to launch an indigenous Covid vaccine by August 15, 2020,” explains an expert, requesting ­anonymity. “India wanted to be the first in the world to come out with a vaccine. Now it is likely to be launched by mid-2021, depending upon the requisite approvals from regulatory bodies. These things cannot be fast-tracked.” It took a decade for the rotavirus vaccine to come out, ­including a four-year trial period.

More than a dozen ­vaccines are given free under the Universal ­Immunisation Programme.

So the problem is not with giving the vaccine free, but in rushing through with it without testing its efficacy and without studying its long-term impact. If the Narendra Modi government wanted to be the first with the vaccine to earn global applause, then Donald Trump ­administration’s attempt at the ambitious Operation Warp Seed—to enable access to the vaccine by October—was clearly aimed at his presidential re-run. China and Russia, also in the race for the first vaccine, have been ­criticised by scientists across the world for not vetting ­potential safety issues adequately. Incidentally, China had to take on the global polity in the ­initial stages of the pandemic too, when it began to be widely known as the Wuhan virus or the Chinese virus. It is believed to have used its ­influence with the World Health Organization (WHO) to ensure that labelling of the virus based on place of origin was avoided.

Whatever may be the reason for ­politicisation of the vaccine in various countries, including India, it is not necessarily a bad thing. Experts are of the view that Covid has finally brought health into the public discourse, and the sector may finally get the attention it deserves. Neeraj Jain, India ­country director of PATH, agrees that the ­pandemic has changed the priorities of health systems around the world. “There is a greater ­understanding that without improving health, we cannot address poverty and development, which is leading to greater political commitment for strengthening health systems,” he says. PATH is part of COVAX, which is co-led by Gavi, the Coalition for Epidemic Preparedness Innovations (CEPI) and WHO. COVAX is a global effort to ensure that people in all corners of the world, regardless of their wealth or income, get access to Covid vaccines once they are available.

ALSO READ: ‘We Have Enough Resources To Provide A Vaccine To Every Citizen’

“Countries are faced with the immense ­challenge of rapidly responding to the pandemic, while continuing to make progress against other health goals,” says Jain. “With limited time and resources, existing barriers to health services and inefficiencies in health systems appear ­magnified. But many countries, including India, are translating the urgency around COVID-19 into opportunities to create more resilient health ­systems.” According to him, equitable access for all should be the guiding principle for any rollout of the vaccine. His simple formula: “Those who can afford to pay should pay and those who ­cannot should get it for free.”

Public policy expert Rajendra Pratap Gupta agrees that the vaccine should not be free for all. For him, the bigger issue is putting a proper ­system of rollout in place with proper coordination among various agencies. “We do have a ­disparate system with agencies working in silos, but it is still very much doable,” he says. Gupta suggests use of technology, automation and ­existing apps like Aarogya Setu, which has more than 163 million downloads, for vaccine delivery.

However, the bigger challenge would be Centre’s coordination with the state ­governments, given that health is a state subject and the implementation of the vaccine ­programme needs to be done by the states. “There must be complete trust between the Modi government at the Centre and the various state governments. Only then can there be proper ­coordination needed for smooth implementation of the vaccine ­programme,” says a BJP leader.

‘India Will Need Hundreds Of Millions Of Doses’