Politics As A Sedative 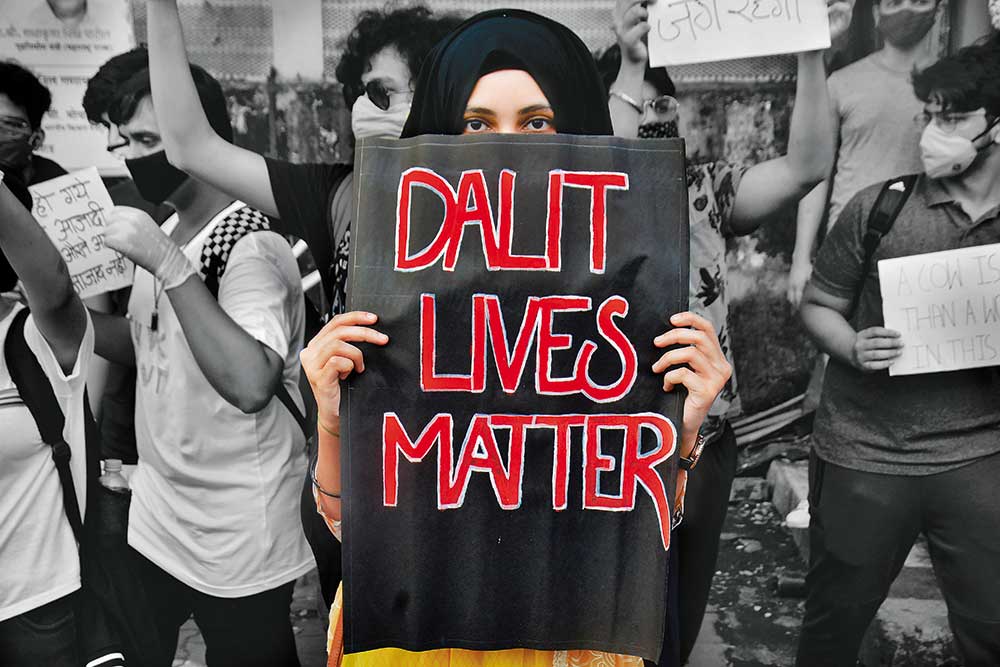 Let’s begin with the inevitable, and dismal, beginning: NCRB’s crime data. Early this year, its report held that Uttar Pradesh ­remains the top state for crimes against Dalits, including rape, murder and land-related violence. Cumulatively, they witnessed a 47 per cent increase during 2014-18 in UP, followed by Gujarat, Haryana, Madhya Pradesh and Maharashtra, all ruled by the BJP during the period covered. Paradoxically, these are also among the states (including Karnataka, Rajasthan and West Bengal) where the BJP won the maximum number of seats reserved for the ­governmental category of Scheduled Castes: totalling 46.

These years have also witnessed a steady erosion of fundamental rights and constitutional principles, through judicial pronouncements on reservations in particular. In March 2018, it was the attempt to weaken the stringent provisions of the SC/ST (Prevention of Atrocities) Act of 1989 by the Supreme Court that led to Dalit organisations holding a successful all-India bandh, peaceful but for isolated cases of skirmishes with opponents of the bandh from dominant communities. It was then that, for the first time, one heard the prominent Dalit leader and Union minister, Ram Vilas Paswan, as a leading voice—perhaps orchestrated to be so—in a well-publicised parliamentary session where the Centre decided to restore the original provisions of the law. Subsequently, the Supreme Court, on an appeal by the Centre, recalled the verdict that had diluted it.

ALSO READ: Red Earth And The Sky A Dalit Blue

Paswan had expressed the apprehension that there could be more unrest and that a ‘wrong message’ was being sent to Dalits. A series of policy-led moves—the closure of academic centres for studies on social inclusion and Dalit studies, attempts to end pre-matric scholarships to Dalit students, the cases related to Bhima Koregaon under UAPA et al—have added to the apprehension among Dalits that their constitutional rights were being eroded steadily and that the ‘consensus’ could move towards the end of reservations itself.

ALSO READ: The Ghost Of Manu

That Dalit elected representatives from the BJP and its allies in the NDA are either silent or have allowed themselves only a few muted expressions in response to the biggest symbolic Dalit issue of the day—the most brutal violence and gang rape in Hathras—raises several questions about ­representative politics as well as Dalit politics in UP. Take women MPs too. Media reports said that of the 11 women MPs and 38 women MLAs from UP, barely a few admitted grudgingly to “evil elements in society”, while one held that organised crime had come down under the present regime and that no “innocent should be punished”. Many refused to go on record with their responses. The Hathras BJP MP, Rajvir Singh Diler, in fact, visited Aligarh jail where the four accused in the Hathras gang rape are said to have had a cup of tea with the jailor. Most of the Dalit BJP MPs and MLAs from UP merely said the incident had “dented the party’s image and was politically damaging”, blaming the police, especially BSP-SP appointees among them, while expressing ­confidence in the chief minister.

To recall electoral narratives, the political space in UP has been confined to the binary of identity politics or the politics of belonging on the one hand, and the politics of ‘belongings’—roti, kapda, makaan—on the other. The Samajwadi Party, the BSP and the two national parties, Congress and BJP, are broadly ranged on either side. These two trends in political practice were often conflated in the actual contests between the parties. This was particularly the case with the BSP, while the Congress and the BJP reconfigured their narratives and perspectives on identitarianism in line with their own ideological biases. The idea of reservations and the approach to caste constituencies have become the subject of experimental interpretation within the framework of party manifestos and election campaigns. The Congress has overcome its inhibitions on (or opposition to) the ‘cultural fact’ of community. In the Constituent Assembly, ‘community’ was left to the goodwill of Indian secularism, and reservations had become part of the Constitution.

Following the Sachar ­Committee’s report, the Congress had been leaning towards ­reservations for minorities, as is evident from the provisions in the Lok Pal Bill and its campaign in UP. In the UP election campaign, BSP leader ­Mayawati’s slogan was ‘Share according to participation’—“jiski jitni bhagedari, uski utni hissedari”. The BSP’s Dalit Prerna Sthal project, brimming with Buddhist symbolism, goes beyond caste: it’s a pan-Buddhist cultural ­community rather than a religious community with Buddhist practices. Extending quotas for poor among ­dominant-caste voters, reservations were no longer the main political framework of the BSP. It’s a combination of the politics of belonging and of belongings, an economic slogan meant for the two electoral constituencies; there was also a perceptibly higher all­ocation of seats to the Rajput-Brahmin combine. The BJP, on the other hand, with its new swadeshi paradigm and the ‘Hamare Sapnon ka Uttar Pradesh’ (the UP of our dreams) project, was sending its message to OBCs, while focusing its groundwork among the Dalits, without being explicit about caste. Similarly, in Bihar, the JD(U) forged a social coalition with the dominant castes, while simultaneously focusing on Dalit subcastes, Pasmanda (Dalit) Muslims, as well as Mahadalit, with attempts to give it a constitutional category.

With such reconfiguration of ­categories in electoral politics—­including constitutional categories—newer political subjectivities are being formed. Caste, community and nation are being reshaped in these debates—the nation, rescripted in line with ­homogeneous religious conceptions, marginalises sections of its own citizens. There are also ongoing protests on reservations, judicial challenges and failed implementation. Also, the dominant discourse in India tends to conflate caste discrimination with a series of ‘neutral’ terms that designate inequality ­broadly—via poverty and unemployment. This also projects the ­beneficiaries of reservations, such as Dalits, as sections who do not understand their ‘real interests’ or stand for the interests of ‘their ­community’; and of course, how merit and efficiency are affected in state institutions. This erodes the meaning and content of discrimination, and overlooks the history of the debate on reservations and, in a sense, naturalises caste privilege. In the Constituent Assembly, a more concrete meaning of untouchability was left to the judiciary. As Gopal Guru analysed, “The framing of Untouchability insulates the source of untouchability...and captures only the sites of untouchability.” The identity of oppressor castes remains unproblematic whereas the untouchables are classified and regulated.

It would be meaningful to foreground, in our anti-caste conversations Dalit political thought, writings, literature and activism, both historical and contemporary. While introducing the draft Constitution, Babasaheb Ambedkar had pointed to the contradiction between the political sphere, which upholds the principle of non-discrimination, and the social and economic spheres where inequalities persist and discrimination is perpetua­ted. It is the obligation of the State to ensure dignity and justice to all sections of people through social and economic rights. The list of caste violations and forms of violence have been expanded in various laws—from the Untouchability Offences Act of 1955, the Protection of Civil Rights Act, 1974, to the SCs/STs (Prevention of Atrocities) Act, 1989, in particular bringing in sexual violence. Ambedkar’s three main warnings on political, social and economic equality, however, remain as relevant today as during his presentation of the draft Constitution of India.

(The writer is a policy analyst based in Kochi, Kerala. Views are personal.)