Pens Against The Tide

Bengal’s intellectuals, hitherto agents of political transformation, are viscerally opposed to the BJP’s call for change 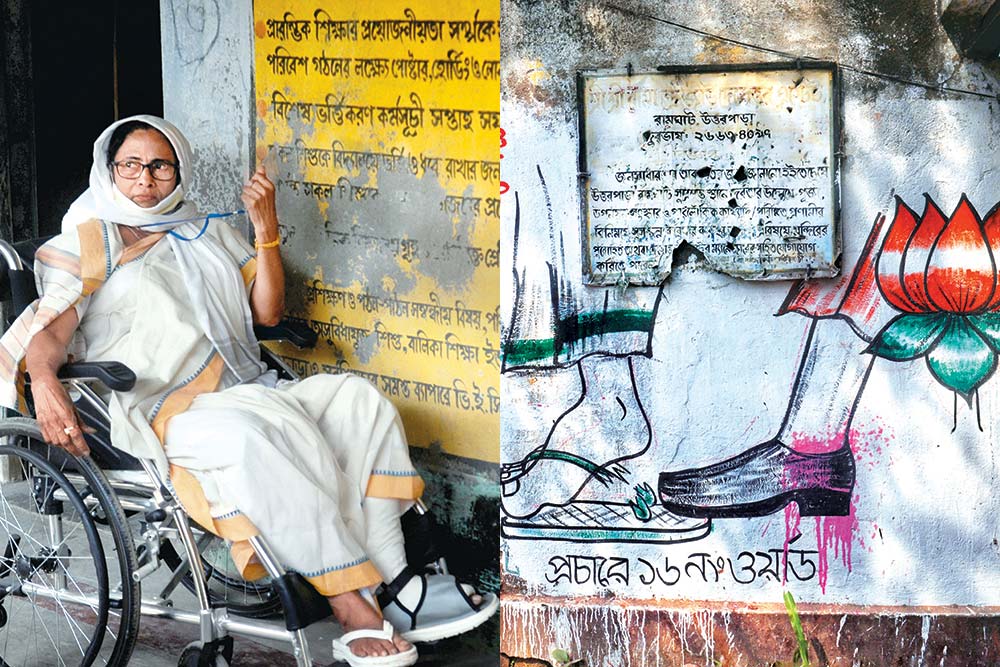 Still Fighting On
Right, Mamata is taking on the BJP throughout the acrimonious campaign from a wheelchair; far right, a boastful BJP grafitti targets her trademark chappal—a symbol of solidarity with the masses

Two of Bengal’s watershed political moments—that of the Left Front coming to power in 1977 and the fall of that regime after 34 years in 2011—had witnessed writers, actors, singers and artists helping create a pro-change wave. In 2021, as Bengal anxiously keeps watch over another possible significant change, one perhaps no less impactful than that of 1977, the role of these intellectuals, referred to in Bengali as Buddhijibi, stands in contrast.

The majority of prominent personalities from the world of literature, theatre, arts and music stand opposed to the Bharatiya Janata Party—the principal force calling for a change of regime. This, perhaps, is a reason why the BJP’s Bengal unit chief, Dilip Ghosh, has made a series of incendiary, belittling statements about intellectuals. After having set new standards of anti-intellectualism, Ghosh’s latest tirade include such taunts as “intellectuals are a burden on society” and “actors and singers better stay focussed on acting and dancing. Don’t try politics. Otherwise,...