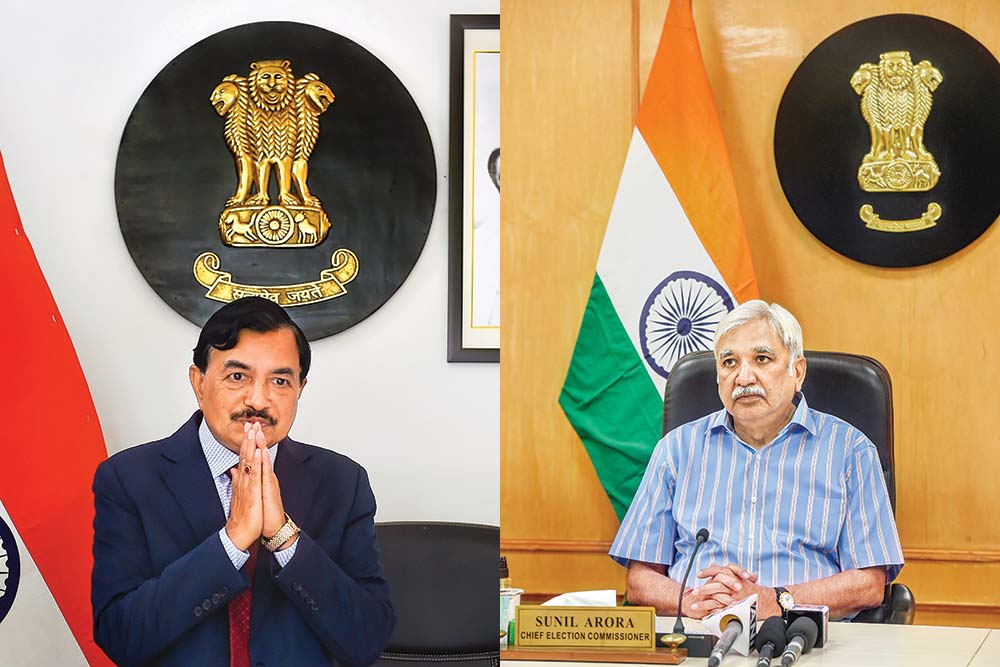 Men In The Muddle
Sushil Chandra (left) is the new CEC. He took over from Sunil Arora.
Photographs by PTI
Puneet Nicholas Yadav April 22, 2021 00:00 IST Omission And Commission

Conspiracy theories about hacked EVMs are old hat. From baffling poll schedules and inequitable application of the model code of conduct to brazenly partisan policy prescriptions, the litany of accusations hurled by various­ ­stakeholders—barring the BJP and its allies—at the Election Commission (EC) gets more expansive with every election. The ongoing assembly polls have been no different, and this time the blame has been pinned on Sunil Arora, who was chief election ­commissioner (CEC) until April 12 and oversaw elections in Tamil Nadu, Kerala, Assam and Pondicherry as well as four of the eight phases of polling in West Bengal. Arora’s successor, Sushil Chandra, under whose watch poll results will be announced on May 2 and crucial elections held in Uttar Pradesh, Punjab, Uttarakhand, Goa and Manipur next year, is certain to face similar accusations.

Arora’s tenure would likely serve as a ready reckoner for Chandra when he steers the EC over the next 13 months. The EC has a robust institutional memory shaped as much by the likes of...