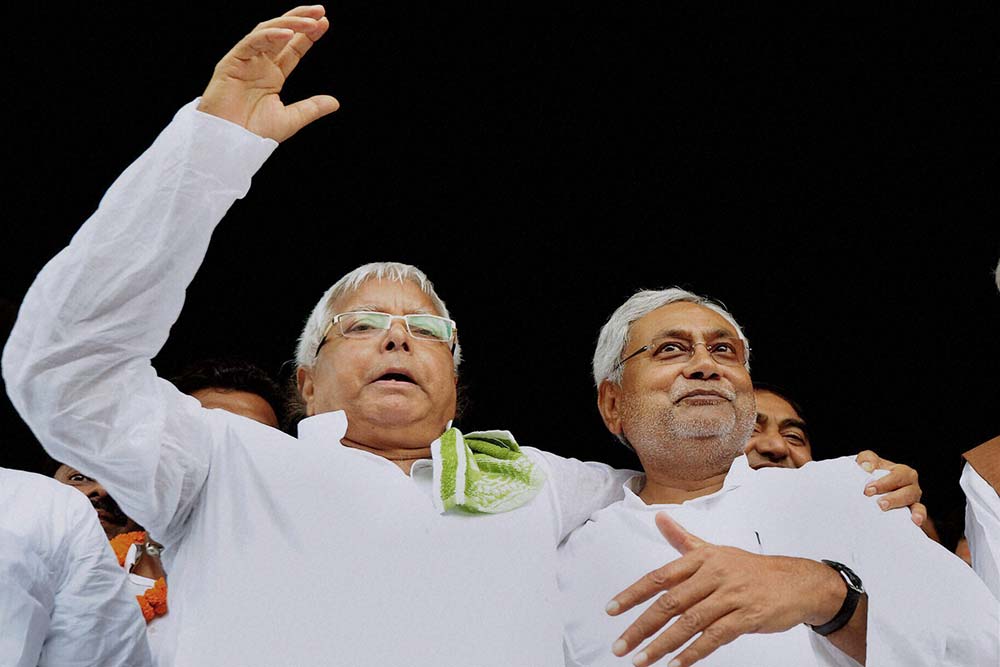 The Yadav vote bank has been an impregnable fortress held valiantly by Lalu Prasad Yadav over the past three decades in Bihar. But it appears to be under siege now, with chief minister Nitish Kumar out to breach what is considered to be the last frontier of the embattled RJD president ahead of the assembly elections.

A dominant OBC group comprising about 11-12 per cent of the total population, the Yadavs have played an assertive role in state politics, invariably reposing unflinching faith in the leadership of RJD president, regardless of whether he is in or out of power. Now, Nitish has set out on a mission to wean the all-important Yadav voters away from their maverick caste icon, currently serving a prison term in Jharkhand.

It is something Nitish is not known to have ever attempted, overtly or covertly, ever since he came to power 15 years ago. And he appears to have hit upon a two-pronged strategy to accomplish his goal. First, he is telling the Yadav voters how Lalu has served only his family at the cost of the entire community, and second, how he has mistreated the formidable caste icons for his vested interests. Also, in a clear departure from his avowed stand of not making personal attacks on his political rivals, Nitish even cites the troubled marriage of Tej Pratap to underscore an indifferent attitude of Lalu’s family towards fellow  leaders.

In 2018, Tej Pratap, Lalu’s eldest son, married MBA graduate Aishwarya Rai—the granddaughter of former chief minister, the late Daroga Prasad Rai—with much fanfare, but it turned into a bitter court battle for divorce within months. Nitish now thinks that Lalu’s family treated an educated girl like Aishwarya rather shabbily. “It is a family matter and I do not want to say anything,” the CM said at a virtual rally to formally kick-start the JD(U)’s poll campaign recently in Patna. “Aishwarya is the granddaughter of Daroga Babu. What kind of treatment was meted out to her?”

Rai, who headed a Congress government in 1970, was a widely-respected Yadav leader. His son Chandrika Rai (Aishwarya’s father) is an ex-minister who won the 2015 assembly polls on an RJD ticket but recently moved to JD(U).

Apart from Rai’s family, Nitish also mentions the treatment meted out by RJD to its legislator Jai Vardhan Yadav before he switched over to JD(U) recently. Jai Vardhan is the grandson of late Ram Lakhan Prasad Singh Yadav, a former Union minister known popularly as Sher-e-Bihar. A formidable leader from the Yadav community, he had set up many educational institutions in his lifetime. Jai Vardhan’s father, Prakash Chandra Yadav, too, was a Congress MP.

Nitish says that both these Yadav icons had helped Lalu but their family members have been given a raw deal by him. “Look at the way the grandchildren of Daroga Prasad Rai and Ramlakhan Singh Yadav have been treated. They are just running a family dynasty. This family has forgotten how they had helped it in the past,” Nitish said, in a not-so-veiled attack on Lalu. “When the families of such renowned persons have been subjected to such treatment, one can think of others,” he said, sounding a word of caution to the Yadav voters. 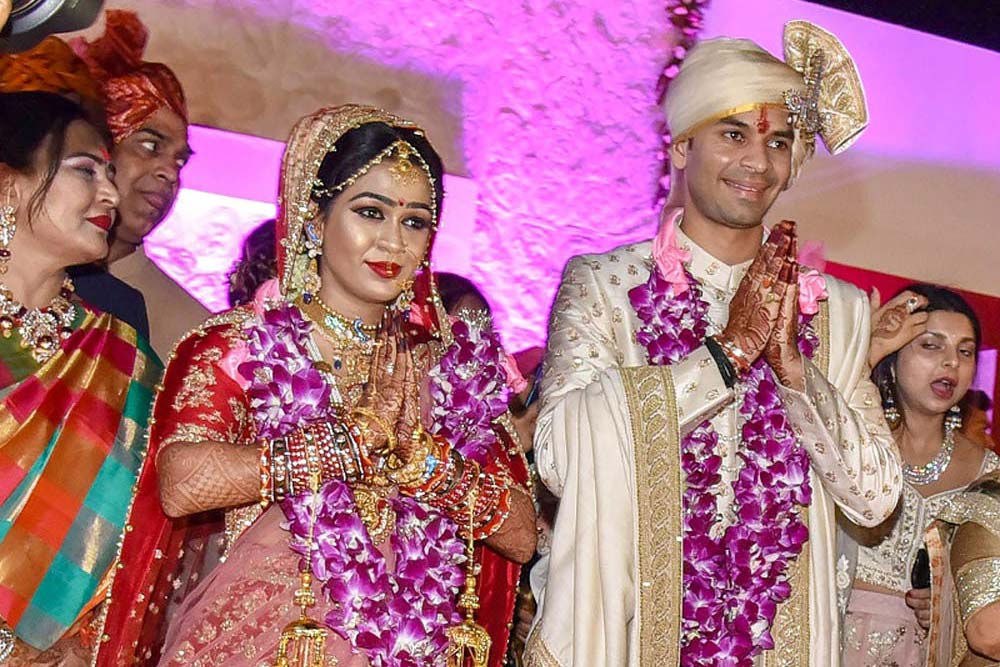 Tej Pratap married Aishwarya but it turned into a bitter divorce battle within months.

Under his well thought-out strategy, Nitish stresses the need for making the new generation of voters aware of what pati-patni (Lalu Yadav-Rabri Devi) did for Bihar during their reign. “The new generation of voters should be apprised about the differences between our respective 15-year-long tenures. They may have been three or four-year-old kids when we formed the government (in 2005) but they have since grown up to be the new voters.”

Nitish’s remarks evoked a sharp response from Tejashwi Prasad Yadav, who is leading RJD’s poll battle from the front in the absence of his jailed father. “Let him (Nitish) abuse us, but will it be of any good for the people of Bihar?” he asks. “He should highlight his achievements but then, what are his achievements in the first place?”

The leader of opposition says that the chief minister is “smelling the 30-year-old stale papers”. “In rakshaksh raj (demon’s reign) of today, he is talking about jungle raj (lawless regime),” Tejashwi quips. “Half of his party leaders are from the same jungle raj. Yet, he is harping on it. If our 15-year reign was indeed a jungle raj, then why did he come to us with folded hands for an alliance with us in 2015? Why this dual character?” he asks, reminding Nitish of the JD(U)-RJD alliance, which won the last assembly elections with a brute majority before the chief minister walked out of it.

Many Yadav leaders believe that voters from their community will vote for the JD(U) and NDA candidates in the coming election, as they are disenchanted with Lalu. “The entire community was responsible for the rise of Lalu Yadav but he chose to work only for the benefit of his immediate family,” says Chandrika Rai. “The RJD has become a party of one family. That is why the Yadavs will vote for NDA, as they did in the parliamentary elections last year. Tejashwi does not stand anywhere Nitish in terms of stature or development work.”

Referring to Nitish’s mention of the Yadav icons, including his father, Chandrika says that Lalu had always sought to neglect those whom he considered to be a threat to his supremacy.

Political observers think that Nitish is consciously trying to woo the Yadav voters, especially the young Yadav voters, but it is doubtful if he will ultimately succeed. “Nitish is trying to woo the Yadavs by playing an emotional card because he knows that he has already exhausted his development and good governance plank,” says political commentator and economist Nawal Kishore Chaudhary. “This is why he is raising the issue of the mistreatment of the Yadav community icons.”

Chaudhary states that it may not pay off. “It may be Nitish’s fresh strategy to connect with Yadav voters on an emotional level but it is not so easy to wean the entire community away from Lalu,” he says. “A section of Yadavs, especially those from upper echelons of the community, did shift to Nitish earlier on his promise to create an aspirational Bihar by providing development and good governance along with social justice but that plank, with the passage of time, has lost its efficacy now.”

Lalu’s hold over his community is also considered to have been weakened due to his imprisonment in recent years. “Laluji has been in and out of jail for many years,” says an RJD leader on the condition of anonymity. “Had he been out of jail, none of our Yadav MLAs would have crossed over to JD(U). Remember, in the last Lok Sabha elections, he had even fielded Chandrika Rai from Saran seat despite the fact that their personal relations were far from good due to problems in Tej Pratap-Aishwarya marriage. In his absence now, Tejashwi is simply not equal to the task.”

Nonetheless, RJD loyalists are looking forward to Lalu’s return from Ranchi prison before the election campaign gets momentum and the list of party candidates is finalised. On October 9, Lalu will complete half of his five-year prison term and his lawyers are likely to move the court for his bail on this ground. If it happens, it will doubtless boost the morale of the party cadres.

Meanwhile, Nitish has his task cut out as far as storming Lalu’s Yadav bastion in this election is concerned. There are already speculations that Tej Pratap Yadav might face his estranged wife Aishwarya in the poll ring. Her father, Chandrika Rai has also hinted that he will extend all support to his daughter if she wishes to contest the elections. Tej Pratap had won from Mahua constituency in Vaishali in the last assembly polls, but he is now said to be toying with the idea of moving to Hassanpur, a traditional RJD stronghold, in Samastipur. If Nitish chooses to field Tej Pratap’s estranged wife against him on the JD(U) ticket, Bihar may well see a new twist in the tale of legendary rivalry between Nitish and Lalu in the coming polls.