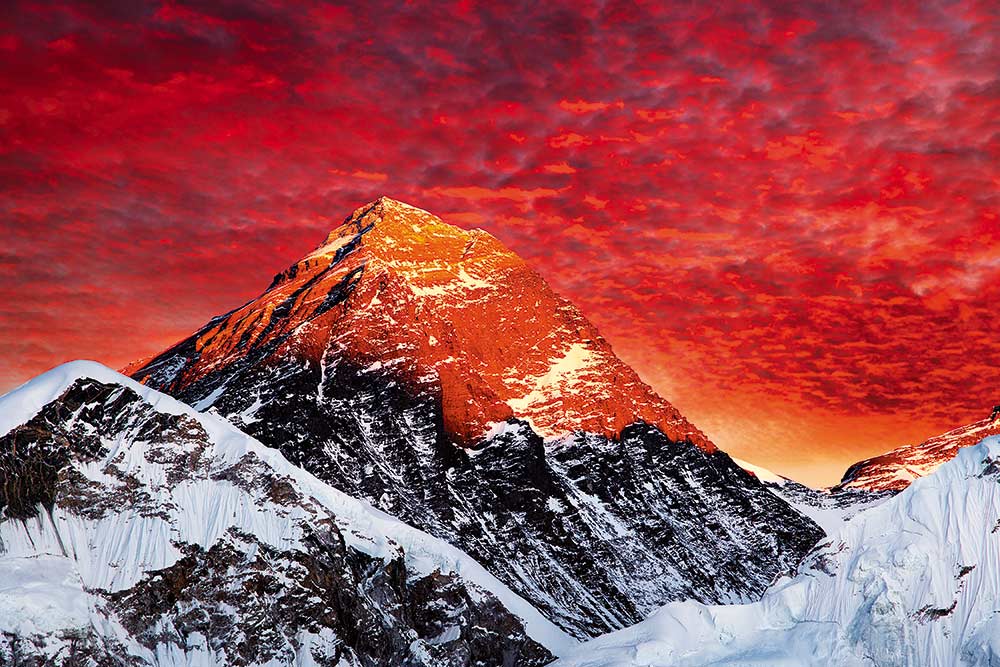 Charlatanry has seldom aimed so high. Narender Singh Yadav, 26, a Haryana resident who was to receive the Tenzing Norgay Award, India’s highest recognition in adventure sports, from President Ramnath Kovind on August 29, has gone incommunicado after the government decided to withhold it. The decision came after several Indian mountaineers pointed out on social media that Yadav never climbed Mt. Everest in 2016 and that his photo on top of the world was morphed.

Subsequently, the Nepal government launched a probe into Yadav’s claims, which they had approved in 2016. If his claim is found to be false, Nepal may rescind the certificate issued to him, as it did for a Pune-based police couple who in 2016 made similar claims and were called out as liars.

By the time the government decided to withhold Yadav’s award, reports by German mountaineering journalist Stefan Nestler, American adventure travel writer Kraig Becker and American mountaineer-cum-chronicler Allan Arnette had spread the news among the mountaineering community around the world:  another Indian had likely faked a summit to Everest.

Overall, Yadav is the seventh person whose Everest claim has come under question over the past four years. While allegations of faking a climb of the world’s tallest peak have been lab­elled against mountaineers from other countries as well, climbers from no other country but India are so prolific with the dubious claim. 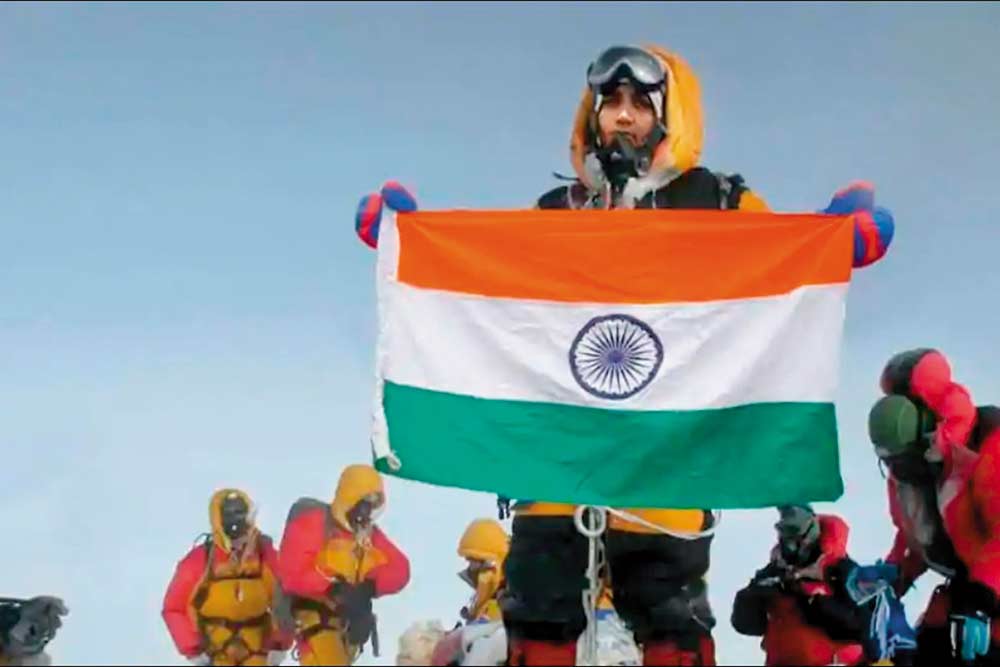 Tarkeswari Bhalerao, policewoman, atop Everest in a ‘morphed’ photo

Mountaineers say liaison officers pocket their fee, and are happy to authenticate climbs without due process.

Lakpa Sherpa, a Kathmandu-based mountaineering guide who has scaled Mt Everest seven times and the K2, the world’s second-tallest and notoriously difficult peak, twice, says over the phone that the series of incidents have earned Indian mountaineers a bad name. “Mountaineering is a new craze in India. In recent years, the highest number of Everest climb asp­irants has been from India. Some were not experienced enough. By resorting to fraud, they are harming the reputation of the real champions from India,” he says.

In 2019, of the 78 Indians who got permits for the climb, 61 succeeded, while four died during their ascent or descent.

Yadav has vanished from social media platforms since the controversy erupted. Outlook tried to reach him over phone, text messages, WhatsApp, Facebook and Twitter; he remains steadfastly silent.

Can one con a climb?

Firstly, it’s not easy. One has to be close to the top—there are four ‘camps’, the last at 8,000 metres—at least to make summit claims. Second, it takes about Rs 20 lakh to make an attempt. And third, the formal ack­nowledgment of summiting Everest comes from Nepal’s department of tourism. The certificate is issued only after the expedition company, the accompanying Sherpas, the team leader and the liaison officers (government employees) jointly conduct a debriefing before the department. Climbers are required to furnish photos or videos as evidence.

The system, however, is not watertight. In 2019, the Centre for Investigative Journalism (CIJN), Nepal, probed the role of the liaison officers and wrote, “Our months-long investigation reveals chilling collusion among liaison officers (LOs), expedition companies and bureaucrats at the ministry to award summit certificates to fake climbers.”

While the Nepal tourism department had in 2019 admitted that of the 37 liaison officers only 22 reached the Everest base camp, the CIJN report said most of the 22 spent only a few days at base camp.

“It is impossible to establish a false claim of climbing without collusion between climbers, the expedition agency and the liaison officers,” says Bhadra Sharma, a Kathmandu-based journalist who has reported for various international media outlets.

Liaison officers are appointed by the government but their expenses are paid by the climbers. Members of India’s mountaineering community told Outlook that these liaison officers in most cases prefer to pocket the money without caring to visit Everest and are always happy to sign authentication. Climber Kuntal Joshier, who summited Everest twice, once from the Nepal side and the other from the China side, pointed out that even team leaders may not be fully aware of the status of each of their mountaineers in a climb.

“The team leader may not always be completely aware of the movements of all the members. Besides, they often tend to sign the debriefing document without going through the whole content because it runs into about 100 pages. In case the agency has put an unsuccessful climber’s name in the document, the team leader may well miss it,” says Joshier.

The agencies, however, say that they have little role in the whole scheme. “If the team leader and the accompanying personal sherpas support the climber’s claim, we have little to do,” says Mingma Sherpa of Seven Summits Treks, one of the major agencies in Nepal. 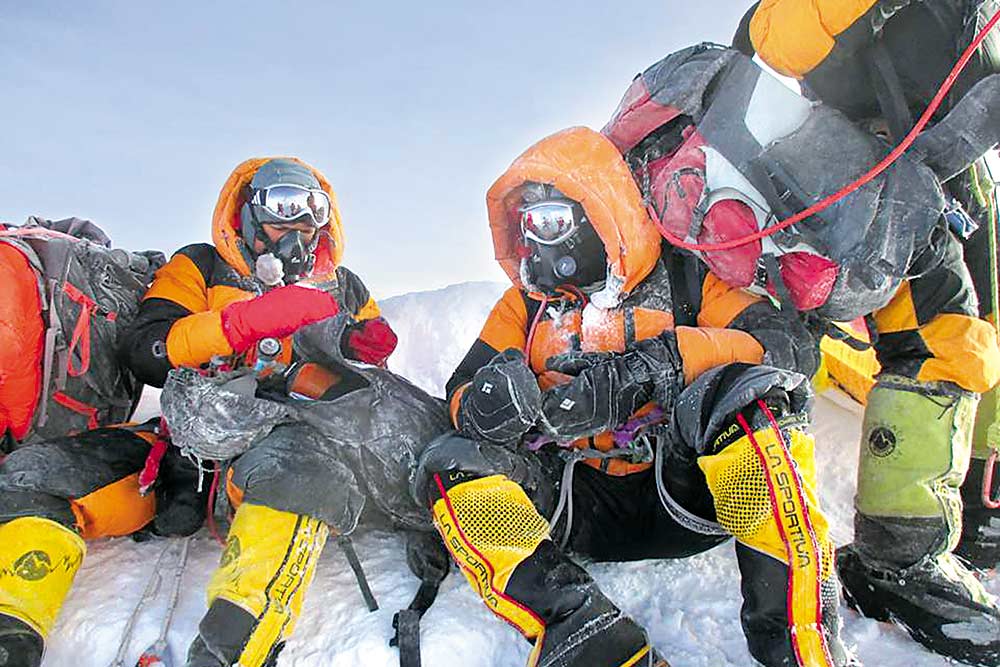 Satyarup Siddhanta and Maloy Roy on the summit

It was also found in 2019 that Bishwa Bandhu Regmi, a liaison officer who stayed at the base camp only till the middle of May, had authenticated the summit claims of three Indian mountaineers—Vikas Rana, Shobha Banwala and Ankush Kasane, three youths from Haryana who allegedly climbed the world’s highest peak. Despite their claim, the Nepal government did not grant them certificates.

Banwala keeps defending her claim. “The agency that arranged for our expedition duped us. Our sherpa guides were supposed to take all photos but they did not take any. We climbed but there was no proof because of the sherpas and the agency,” Banwale tells Outlook.

While ascents of tough peaks have been disputed all along, majority of recent debunkings concern Everest.

Mountaineering veterans, however, do not buy her argument, saying that the sherpas had no reason to lie because every personal sherpa is entitled to a ‘summit bonus’ of at least $1,500 if the climber reaches the top. This bonus, on the other hand, has been cited as a ‘lure’ for the Sherpas to support a false claim. According to Nepal’s prominent mountaineering agencies, sherpas usually earn between 5 lakh and 6 lakh Nepali rupees for an expedition to Everest, but the summit bonus alone can make for another 2 lakh rupee.

There are more loopholes. The Himalayan Times rep­orted in 2016 that Nepal’s dep­artment of tourism issued summit certificates to the Pune police couple without getting versions of the accompanying Sherpas.

The Cost of a Climb

“What intrigues me most about the Everest scandals are the names of so many Indians among the list of scammers and the deceased. Why are Indians so desperate?” asks Bhadra Sharma.

Alan Arnette, who climbed Everest at the age of 54 in 2011, tried to answer this in an opinion piece for Fox News in 2019: “Often climbing mountains is not about the climb, but the reason behind the climb,” he wrote. “The Indian government often awards summiteers with cash and even land, thus the incentive to push all boundaries to claim a summit.” Arnette added that this was also leading to an increased number of deaths of Indian mountaineers on mountains above 8,000 metres high.

Veteran Indian mountaineers mostly concur with Arnette, while adding that money was also a factor. With an att­empt on Everest setting one back by Rs 20-22 lakhs, it’s an amount most Indians find difficult to raise. Once they have managed to put up the sum, failure is simply not an option. 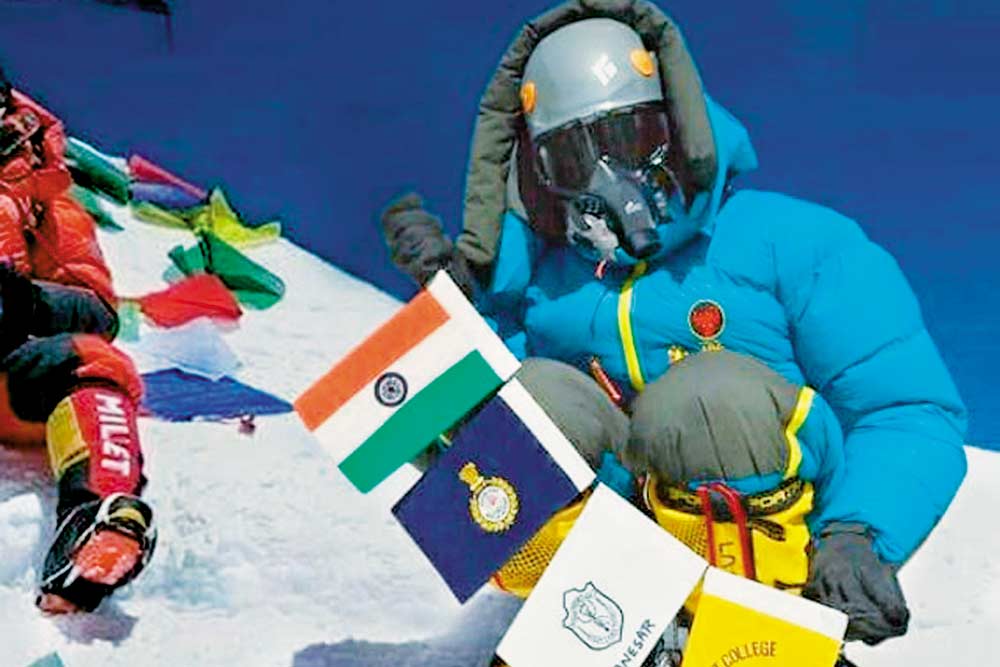 “Climbing Mt Everest makes one an instant hero in India, with scope for material benefits. So a new generation of Everest aspirants who are not experienced enough are keen on taking the risk to get the benefits that may alter her or his life. This is resulting in more deaths, accidents, incidents of frostbite and evacuation. I have seen several persons who have never gone back to the mountains after climbing Everest,” Joshier says.

Mountaineers also point out that ‘successful’ ascents of difficult and unexplored peaks have been disputed around the world and over the ages, but the majority of them in the recent years concern Mt. Everest.

“Climbing such peaks as Kanchenjungha, Annapurna and Dhaulagiri, and some peaks even lower than 8,000 metres, are considered more difficult than climbing Everest. However, public interest, fame, and material benefits come mostly around Everest. So, while the other peaks are targeted mostly by ser­ious mountaineers, a lot of novices attempt climbing Everest,” says Debabrata Mukherjee, a mountaineering veteran who climbed Everest through ‘north col’ or the Chinese side in 2014.

Allegations of fake claims, meanwhile, nearly ruin one’s mountaineering dreams. The Pune police couple, Dinesh Rathod and Tarkeswari Bhalerao, was dismissed from police services in August 2017 for making false claims. In December 2017, they made an application before the Nepal tourism department to reissue their certificate. The government of Nepal reinvestigated the case but the verdict went against the couple. Since then, they have nearly vanished from the mountaineering circuit.

“It’s not easy for a middle class family to get the funds required for such expeditions. Once it fails, it becomes impossible to pursue the dream,” Banwale says.

Debasish Biswas, one of India’s two mountaineers who have scaled all eight peaks above 8,000 metres that are accessible to Indians (six others, in Pakistan, are not open to Indian climbers), feels that the mountaineering community and the media needs to take a sympathetic view of those who falsify claims.

“Cheating is part of every sport in the world, just like in mountaineering. Those who have made false claims may have made a mistake, mostly due to the high stakes but, after all, they must have had a certain love for the mountains. We should encourage them to return to the mountains,” Biswas says. Will the offenders take on the snow-wrapped slopes, crevasses and the constant threat of avalanches to clear their names?

By Snigdhendu Bhattacharya in Calcutta with inputs from Harish Manav