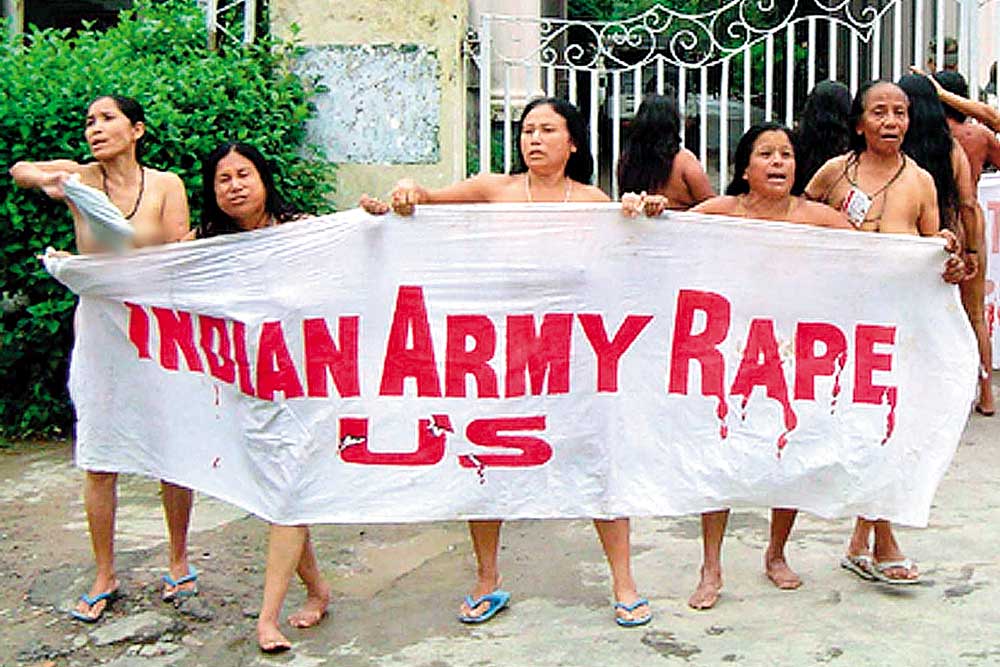 Zone Of Atrocity
The alleged rape and ­murder of Manorama in 2004 led to ­protests against AFSPA across Manipur, ­including this iconic Meira Paibi act in front of the Assam Rifles HQ at Kangla Fort, Imphal
Photograph by AP
Preetha Nair February 14, 2019 00:00 IST Laws Against Justice: Activists Want Repeal Of Laws Like Sedition, UAPA

As the February 2016 JNU row makes a comeback with Delhi police finally filing the charge-sheet after three years, the spotlight is back on sedition—a colonial-era law described by Mahatma Gandhi as the “prince of the political sections of the IPC designed to suppress the liberty of the citizen”. Sedition charges were slapped on 10 students for allegedly shouting anti-national slogans in a gathering, rekindling the debate on scrapping the law. The court slammed the police for filing the 1,200-page charge-sheet without approval from the Delhi government. Amnesty India head Aakar Patel, who wrote to Delhi CM Arvind Kejriwal asking him not to miss the opportunity to end the use of the “repressive” law, says it is frequently used against activists, journalists, lawyers and rights defenders.

Amnesty India too was charged with sedition in 2016, in a case ­related to an event held in Bangalore to seek justice for victims of violence in Jammu and Kashmir. Though a local court closed the case recently, the ­organisation was “branded...