‘Kashmir Is More Peaceful Now, Except For Pakistan Flouting The Ceasefire’

The India-China face-off in Ladakh has had no impact on the situation in Kashmir, says Srinagar-based Corps Commander Lt Gen B.S. Raju 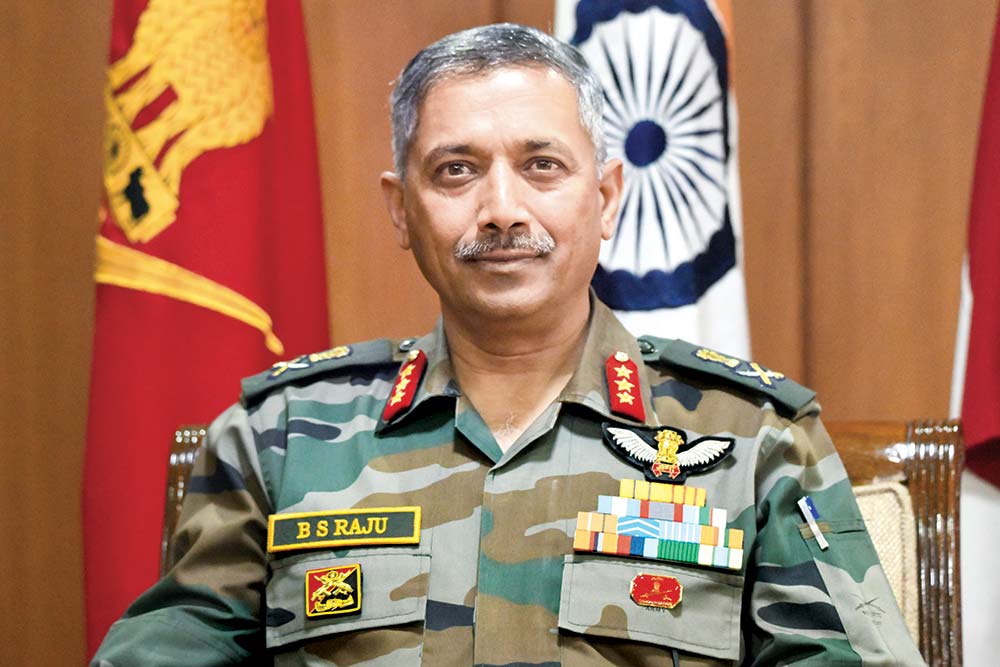 In an email interview with Outlook’s Naseer Ganai, Srinagar-based Corps Commander Lt Gen B.S. Raju states that the ceasefire agreement with Pakistan is an important confidence-building measure. He says security challenges in the 21st century are manifesting in new ways--hybrid threat is a reality at a national and global level. The India-China face-off in Ladakh, says Lt Gen Raju, has had no impact on the situation in Kashmir.

How do you see the situation in Kashmir Valley after August 5, 2019?

It has been over a year since then. It has been trying times for the Kashmiri people and the security forces. There has been lot of effort to prevent violence and loss of life. The intelligence agencies, security forces and the UT government have ensured a largely peaceful year; the situation is stable but sensitive. The people see through the false propaganda of the adversary and are keen to move forward on the path of peace and dev­elopment. It is a phase where positive progressive voices are being threatened and attacked.

The Army maintains the situation has remained by and large peaceful after abrogation of Article 370 last year. Yet encounters take place almost daily.

Daily encounters are a ref­lection of good intelligence and an effective security grid—signs of efforts to rem­ove forces that threaten violence. Over the past few months, terrorists and the leadership of terrorist org­anisations have been effectively targeted and eliminated. This effort is a continuing process. Kashmir Valley has been more peaceful in all parameters of terrorism-related violence compared to 2019, except for ceasefire violations. Desperation in the ranks of terrorists and their handlers witnessed a spurt in attacks on civilians in June and July and on isolated security forces’ posts in August and September. We are working hard to neutralise this threat.

The Ladakh front is handled by 14 Corps. In Kashmir there has not been any major escalation in the situation. We are aware of some defensive deployments done by Pakistanis and we quickly react to any such change. Our security grid is robust along the LoC and in the hinterland, and the Indian Army is well poised to deal with any situation. I hope Pakistanis focus on their own challenges, inc­luding the internal security situation and that on the Af-Pak border.

Is there any change in the pattern of infiltration attempts post Balakot?

‘AFSPA is needed till the army needs to engage in counter-terrorist operations. There’s no change in the ground situation.’

Infiltration bids and their patterns remain dynamic, as does our counter-infiltration grid along the LoC. A robust grid, aided by use of surveillance technology and domination of the LoC curbed infiltration to a large extent this summer. There have been numerous eliminations of terrorists trying to infiltrate in Baramulla and Kupwara sectors. Plus, there are efforts to leave arms caches near the LoC, to be picked by over-ground workers or terrorists on this side. South of Pir Panjal, there have been efforts to drop weapons by quad or octa-copters, for which we are taking countermeasures. We are also mindful of eff­orts to infiltrate weapons from the international border sector; extra checks have resulted in weapons recoveries en route across the Banihal into Kashmir Valley. The Pakistanis are desperately trying to send weapons to Kashmir.

The recent recoveries indicate the role of narcotics money to fund terrorism in Kashmir. Numerous efforts to smuggle drugs along with weapons have been foiled. NIA, police and security forces are jointly working to expose the network. Civil society is conscious of the drug threat facing Kashmir; its support will prove critical in efforts to destroy it.

Ceasefire violations have become routine along the LoC.  Is the ceasefire agreement still relevant or, through numerous violations, has it lost relevance?

There is only one reason for near-constant ceasefire violations: Pakistan Army’s att­empt to push in terrorists to disrupt normality in the Valley. However, the ceasefire agreement is an important confidence-building measure and a step towards lasting peace. We have maintained sanctity of the LoC and shown utmost res­traint even when provoked. I think violations will stop once Pakistan decides to stop aiding terror. At that stage the ceasefire agreement is relevant. We are ready to respond to any provocation appropriately.

Many defence experts argue that the Indian Army has, over the years, become more Kashmir-Pakistan-counter-insurgency centric and given the new geo-strategic challenges, counter-insurgency should be handed to police and paramilitary forces to free the army for bigger challenges. Do you agree?

Yes, security challenges in the 21st century are manifesting in new ways. Hybrid threat is a reality at a national and global level. The army only has a very small portion of its might focused on counter-insurgency, including part of 15 Corps which is looking after this in Kashmir along with its traditional roles. To say that the army as a whole has become more counter-insurgency is incorrect.

Post-August 5, 2019, most Central laws have been ext­ended to J&K. In such circumstances, do you think the AFSPA should remain?

I don’t see any change in the ground situation that merits a change. The AFSPA is an enabling act for a specific purpose and its enactment duration is governed by the timelines of meeting its purpose. It needs to be in force till the time there is a need for the army to engage in counter-terrorist operations. Hopefully, we will be able to bring down terrorism and violence in Kashmir, when the situation will be under control of the civil administration. That will be the right time to get the army back to the barracks by rev­oking AFSPA. I hope that day comes soon; citizens of J&K need a respite from this long phase of Pakistan- and separatists-driven violence.

What is the army doing to bring the guilty to justice in the Shopian fake encounter case?

The Indian Army, like most professional armies, has low tolerance to indiscipline. We have processes in place to investigate and take action where necessary. In this case we took cognizance of social media reports that raised fingers at the conduct of the operation. The inquiry has indicated the possibility of mistakes and the next step, to record evidence—‘summary of evidence’ in army parlance—is being taken. We will proceed as per due process of law. It is premature to share details which may prejudice the process. In operations, especially counter-terror operations, mistakes can happen. Error of judgement is something that can happen in the heat of a combat situation and, hence, is to be dealt accordingly. However, error of intention is serious and unacceptable. We will take action on the same principle once the full details are clear.