Is Your Shot Real Or Plain Water? 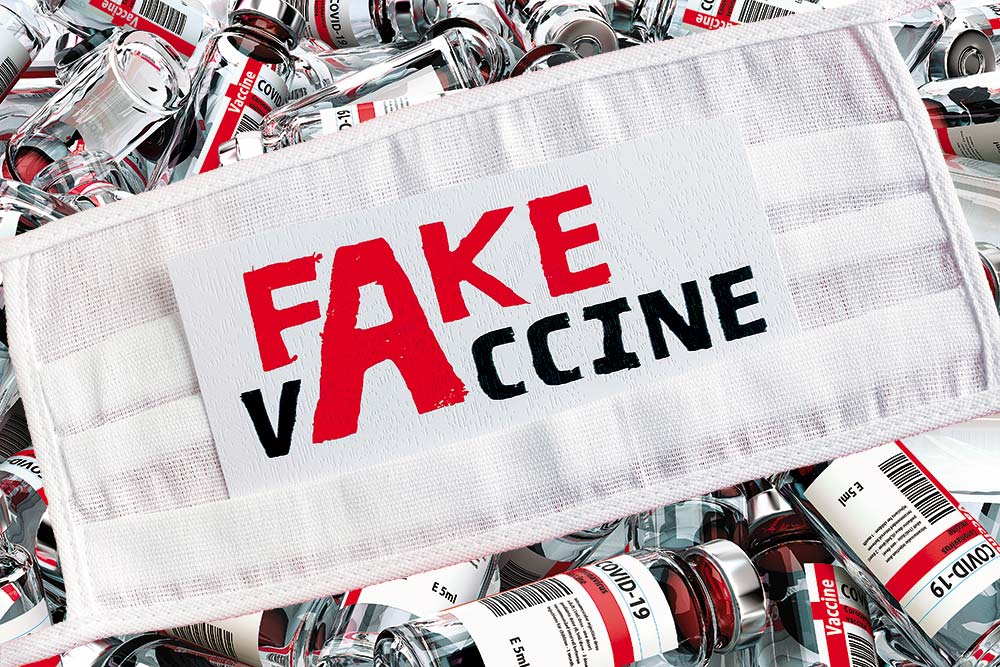 In September this year, even as scientists in India and elsewhere were busy with clinical trials on an effective inoculation against the novel coronavirus, a drug inspector in Odisha seized a large cache of vials labelled as COVID-19 vaccines, from a village 350 km from state capital Bhubaneswar. The seized drug was found to be spurious, perhaps containing nothing more than tap water. “He is a village guy who created the fake drug on his own and named it COVID-19 vaccine. We got a tip-off from our informers, raided the place and seized everything,” drug inspector Sasmita Dehury told Outlook over the phone.

It was a lucky break in a country where manufacturing of spurious medicines is a multi-billion dollar business that puts the lives of millions of people at risk every year. The risk, experts say, has risen manifold with the imminent arrival of a vaccine against the coronavirus, with panic-stricken people eager to get the shot at any cost.

Though government-sponsored studies, conducted thrice in the past 15 years, indicate that only three per cent medicines are of substandard quality in India, pharma companies, industry bodies and non-government org­anisations estimate the figure to be between 25 per cent to 40 per cent. For instance, industry body Assocham said in 2015 that 25 per cent of medicines in India are fake or of substandard quality.

Now there are growing concerns globally that counterfeiters are working parallely with scientists to create rip-off versions of various reputed brands. Fake drugs contain no active ingredients or may contain incorrect doses or wrong ingredients. Counterfeiters use packaging to make their products look like the original, and pass cursory glance of customers in retail outlets.

Law enforcement agencies and regulators such as US’s Federal Drug Agency and the World Health Organization have issued separate warnings to countries against the possibility of counterfeit Covid vaccines. Recently, Interpol too issued an alert to its 194 member countries, askingthem to prepare for potential targeting of Covid vaccines by organised crime networks, both physically and online.

With Pfizer rolling out the world’s first Covid vaccine, and several other agencies on the verge of shipping out their consignments, companies across the world are drawing up elaborate plans to prevent theft, pilferage and counterfeiting of vials as well as the finished products.

Pfizer is sending out fake shipments in dummy trucks to confuse counterfeiters.

Reports say that Pfizer is using GPS software for tracking distribution. So much so that the US pharmaceutical giant is even sending out fake shipments on dummy trucks to confuse counterfeiters who could try to steal the vaccine, The Wall Street Journal reported.

American multinational technology company Corning Incorporated, which is making the glass vials for COVID-19 vaccines, is using black-light verification technology to protect its product from counterfeiters. A vial with this technology shows special characteristics under black light, which can be traced if replicated.

“These concerns are justifiable and genuine...Over the past five years, worldwide incidents such as theft and counterfeiting of pharmaceutical products rose nearly 69 per cent, according to the trade group Pharmaceutical Security Institute,” says Nakul Pasricha, president of Authentication Solution Providers’ Association, which provides technology to pharmaceutical companies for safeguarding their products.

Counterfeiters are expected to be working overtime because of the high demand for a Covid vaccine. Trade exp­erts say that even if the profit margin is low, the expected high volume of sales makes it a lucrative business opportunity.

Companies engaged in protecting int­ellectual property rights for big pharma brands look at various possibilities of vaccine fraud. They say the sources of substandard and fake vaccines are many. “It can be locally produced with used vials which are tossed away as medical waste. This is the easiest way most of the cosmetics and drugs are counterfeited and supplied to medical stores,” says Syed Mashkur Hussain, an IPR firm owner in Noida.

Hussain, who provides services to big companies like Dabur, says that manufacturing vaccines is easier than any other medicine because all the counterfeiters need is water as raw material. They just need to “manufacture a lookalike vial and fill it with water. With digital printing technology, imitating any brand is no big deal,” says another IPR firm owner working with a pharma company. Requesting anonymity, he added, “There are instances in which genuine packaging materials are supplied illegally to fraudsters by company employees looking to earn extra money.”

Besides local production, counterfeit drugs and cosmetics are smuggled into India from China, Bangladesh, Turkey and some other countries. IPR experts suspect the involvement of a global network which may operate parallel to an authorised supply chain of COVID-19 vaccines. “A fake vaccine can be supplied directly to a medical store that ope­rates in cahoots with counterfeiters or it can enter the authorised supply chain with the help of employees of authorised agents or stockists of manufacturing companies,” the IPR firm head says.

Outlook wrote to the Serum Institute of India (SII) for comments on safety measures for its vaccine but the company, which is the largest producer of vaccines in the world, didn’t respond by the time this report went to print. In India, neither manufacturing companies nor the government are yet to come out with safety features to keep Covid vaccines safe and secure. 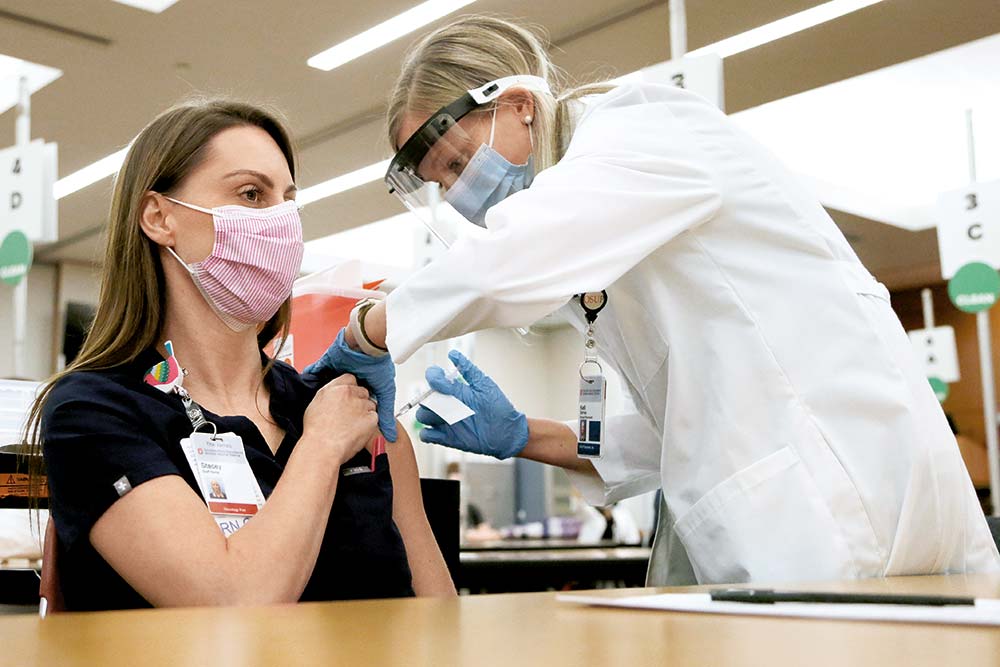 A healthcare worker gets a shot of COVID-19 vaccine, in Columbus, Ohio.

Rajesh Bhushan, secretary in the health ministry, recently introduced the concept of the COVIN app, which will maintain data of people-to-be-vaccinated and stock of vaccines in the government cold chain. Authentication experts say that COVIN can track patients and vaccine stock on a real-time basis but it is not a full-proof mechanism to safeguard the supply chain from theft, pilferage or entry of counterfeit medicine.

They say there are technologies like serialisation and traceability with the help of which each packet of vaccines, containing various vials, can be tracked from the manufacturing plant to the distribution warehouse and all the way until it is dispensed to a pat­ient anywhere in the country. They suggest that if the Aadhaar number of an individual can be integrated with the unique code on a vaccine vial on COVIN app, it can maintain data of which vaccine has been given to whom. Thus, this will make the whole process transparent and accountable for everyone—from the manufacturer to the stockist or the hospital.

It is estimated that the amount of fake drugs in India is between 25 and 40 per cent.

Pharmaceutical companies use the serialisation-and-traceability method to export their products as the Directorate General of Foreign Trade (DGFT) has made it a mandatory provision. However, the same technology is not being used for the supply-chain in the domestic sector as there is a lack of resources in implementing it.

GS1 India, a global standards organisation, set up by the ministry of commerce and industries, along with apex trade organisations, has provided a white paper to the government on how to protect Covid vaccines from theft and counterfeiting. S Swaminathan, COO of  GS1 India, says that vaccines are in development stages, but their ability to end this pandemic depends on an effective supply chain that can connect diverse production locations to the public.

“To tackle this and to ensure that most people benefit out of the initial limited supplies, we need to work on enh­ancing the effectiveness of the vaccine supply chains,” Swaminathan says. “One way to bring in visibility and enha­nce the effectiveness of supply chains is to implement IT-enabled traceability systems encompassing all supply chain stakeholders such as manufacturers, distributors, stockists, chemists, hospitals etc.”

He argued that this would enable all stakeholders to capture and share consignment information to enable complete end-to-end visibility—from the point of manufacturing to the patient. Besides non-application of technology, drug controllers say many vacant posts of drug inspectors and lack of quick redressal mechanism of consumers’ complaint of substandard purchase of drugs have been the perennial problems in India’s struggle to fight the menace of spurious medicines.

In a judgment delivered on August 28 this year, the Supreme Court barred police from either registering an FIR against a counterfeiter or arresting the accused and said that if a person manufactures medicines of substandard quality or sells such medicines without a valid licence, only drug inspectors have the authority to investigate and arrest. The court also asked police to hand over all cases of counterfeit medicines pending with states to drug departments of the states. The SC concurred with a similar order passed by the Allahabad High Court in the same case, though the Union government had opposed the lower court’s judgment that police have no role in counterfeit medicine. 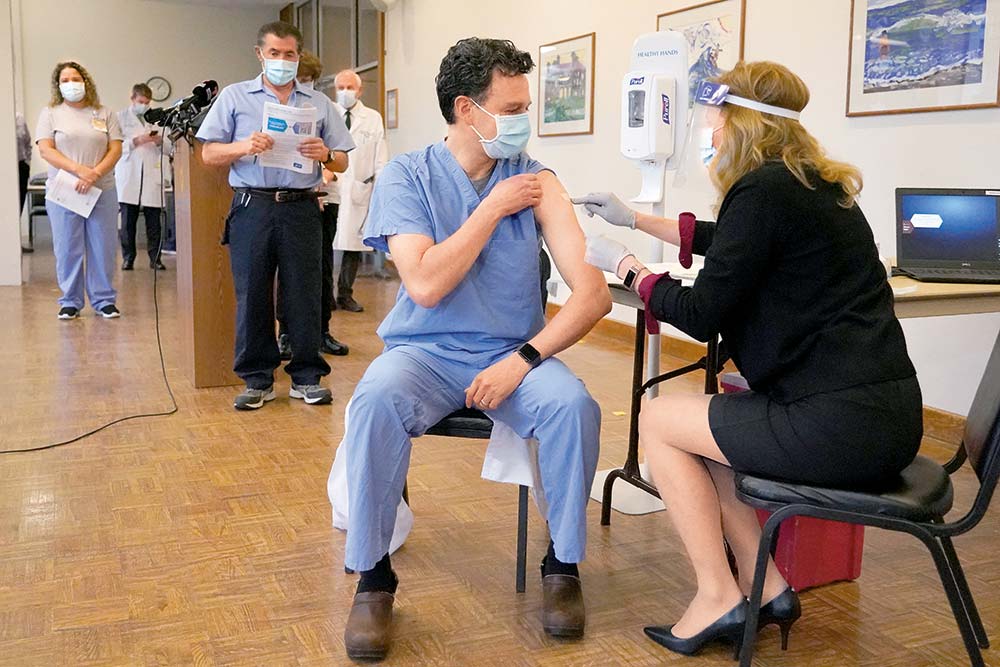 Shot In The arm

A US doctor being inoculated against the coronavirus.

Experts dealing with drug safety issues said the judgment was a big blow to ens­uring safe sale-purchase of medicines in India. “Consumers are already coping  with the absence of a prompt redressal mechanism. Now, the Supreme Court judgment will encourage counterfeiters,” says consumer rights activist Bejon Mishra. If there was a defect in the Drugs and Cosmetics Act, the government should have remedied it by way of amendments and made it more stringent, Mishra suggests.

Sudhir Deshpande, who served in the Food and Drugs Administration (FDA), Maharashtra, for 33 years bef­ore retiring as joint commissioner of FDA in Mumbai, says that before the judgment was pronounced, it was bel­ieved that drug inspectors have all the powers, but the job of arresting a counterfeiter rested on the police. “But the Supreme Court has entrusted that power with drug inspectors. Drugs ins­pectors will now have to do everything on their own. It will pose a number of difficulties.”

He points out that people who are into the business of counterfeiting are rogue ele­ments and drug inspectors are civil off­icers who are not trained for combat situations. In some states like Maharashtra, state police and drug control department were already working in close coordination. For instance, Maharashtra police have a Crime Branch (Drug Control) to assist the state FDA department. The judgment has made these initiatives redundant.

Consumer activists rue that there is virtually no prosecution under the current drug law in India and the Supreme Court’s interpretation will create a whole lot of problems. Dehury, the Odisha drug inspector who seized the fake Covid vaccines, didn’t arrest the person and he is still at large. She didn’t specify why she didn’t arrest the counterfeiter but said, “I only seized the illegally-manufactured vaccines. He will go to jail only when he is convicted in court.”

In times of the pandemic, experts feel that leaving everything to drug inspectors will be asking for too much.

1. Invest in right technology: Companies should invest in serialisation technology which mandates a serial number of each box containing vaccine vials. The technology can track the box from manufacturer till the last-mile use.

2. Create a supportive environment: Regulator/government can provide support to the companies both in financial as well as regulatory terms.

3. Drive Enforcement and Efficiency: Experts say that serialisation can produce a treasure trove of data on verification failures, diversion of goods and contact information of retailers and consumers.

4. Create Awareness among consumers: Besides supply chain security, consumers should be made aware and empowered to verify product authenticity for themselves.