A few ‘Jai Shri Rams’, an incensed Mamata, a charged-up Modi, the mud-slinging aftermath and the turf war over using Netaji 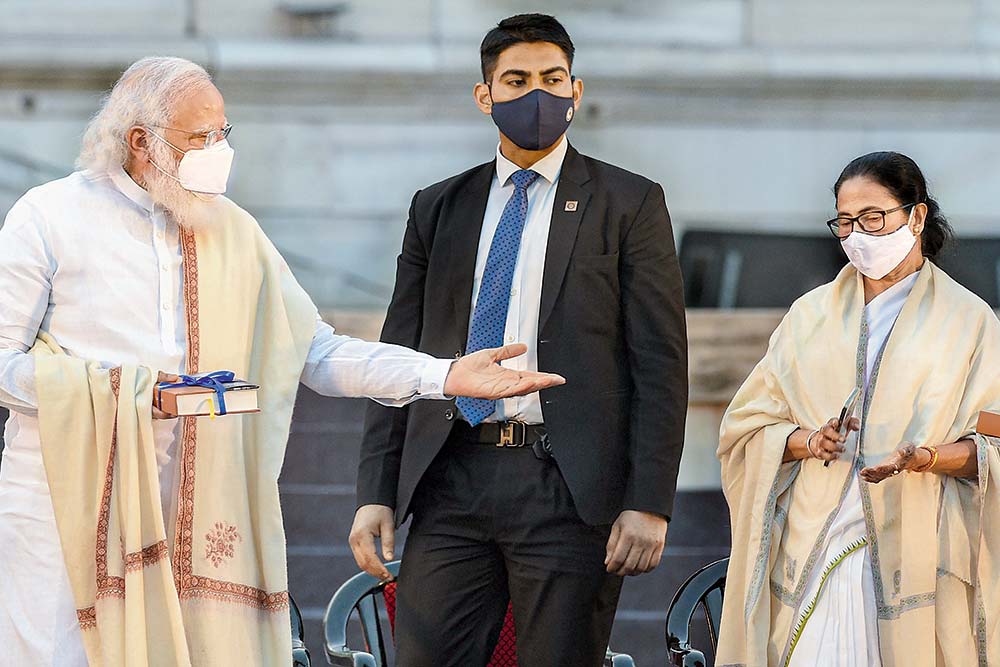 Whose Martyr?
PM Modi with Mamata Banerjee at Netaji’s birth anniversary celebrations at the Victoria Memorial in Calcutta
Photograph by PTI
Snigdhendu Bhattacharya January 28, 2021 00:00 IST In His Mantle Lies A Political Gold Mine

Political gamesmanship involving rival claims over the legacy of a national icon reached an apogee on January 23. That day, the stage was set for Prime Minister Narendra Modi to offer tributes to Netaji Subhas Chandra Bose on his 124th birth anniversary, setting the stage for yearlong celebrations. West Bengal chief minister Mamata Banerjee had accepted the Union culture ministry’s invite to share the dais with Modi at Victoria Memorial Hall, where a mega show had been organised, including musicals and a son et lumiere.

But the sudden eruption of ‘Jai Shri Ram’ chants by a section of the audience the moment Mamata was to deliver her speech added an unforeseen twist to the tale. Instead of Modi’s long speech eulogising Netaji, Mamata’s refusal to speak became the leading news. Following the event, TMC leaders condemned the slogans not only as an insult to the CM but an insult to Netaji, who epitomised communal harmony and was a vehement opponent of communal politics. The BJP’s counterattack followed old lines—accusing Mamata of...