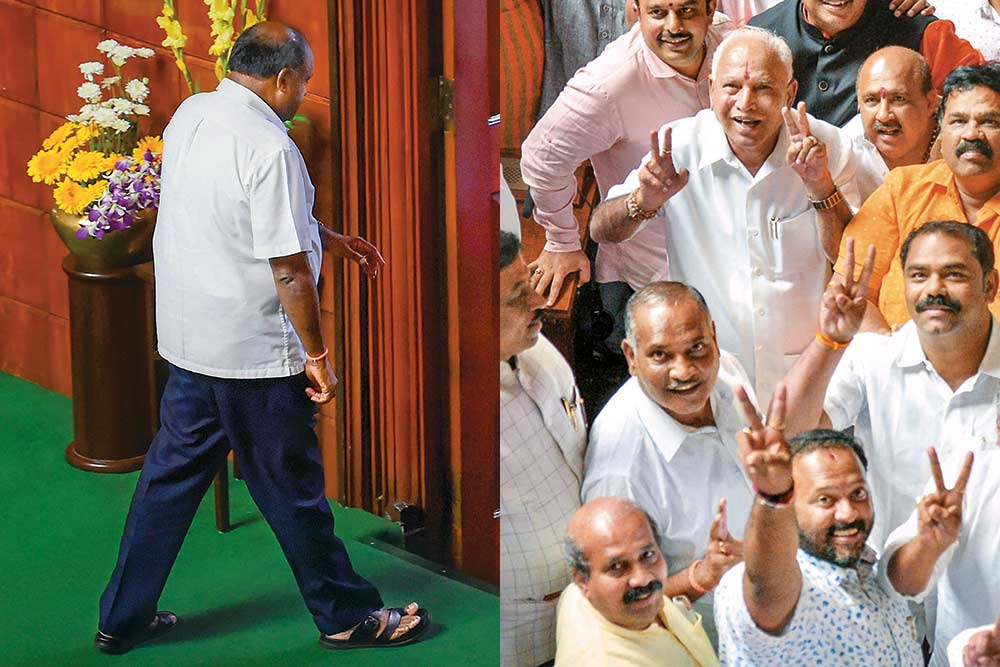 Heads Down, Chin Up
Kumaraswamy walks out; Yeddyurappa and team are all smiles
Photographs by PTI
Ajay Sukumaran July 25, 2019 00:00 IST Height Of Distrust -- Thrice In 13 Years A Coalition Government Jinxed In Karnataka

Coalition experiments haven’t worked in Karnataka. That much has remained constant in a state reeling from political flux over the past months, if not years. When the BJP defeated H.D. Kumaraswamy’s JD(S)-Congress coalition government at Tuesday’s trust vote, it was the third time in 13 years that a ruling alliance had lost the number game. Now, with former chief minister B.S. Yeddyurappa back in the driver’s seat, the BJP gets a second shot at ruling Karnataka.

The denouement itself was laced with irony—it was Kumaraswamy who brought down the Congress-JD(S) coalition, headed by Dharam Singh, in 2006 when he led a faction of his party to a pact with Yeddyurappa. Twenty months later, when Kumaraswamy reneged on that pact to transfer power to the BJP, the second coalition fell. This time around, it was a group of rebels that pulled his 14-month-old government down.

The confidence motion got stretched to four days because the allies hung on to the hope that they could win back some of the 16 rebels. In the final headcount, 20 legislators,...