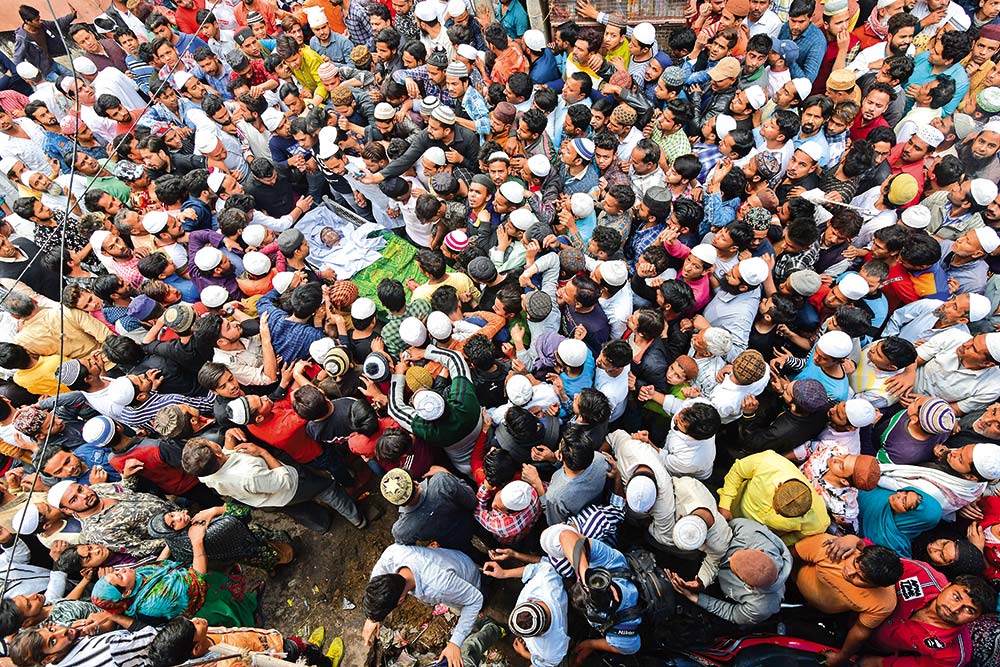 The Last Journey
People gather for the funeral of a Muslim killed in the Delhi riots
Photo by Tribhuvan Tiwari
Jeevan Prakash Sharma March 04, 2020 00:00 IST Delhi Riots 2020: Of Love, Longing And Broken Hearts, The Long Journey To Mind Healing

The boy, barely 10, drags a suitcase through the street strewn with brickbats; a few adults walk ahead of him, holding bags and household items that can be carried. One of them, a woman, looks back at the lane, at a soot-blackened house that had been their home for the past 10 years.  She feels a lump in their throat, but the eyes are dry—they had shed tears nonstop over the past couple of days, their house burnt and their small shop looted by rioters.  They are not sure if they will ever return to Shiv Vihar, which was their home after the family of five migrated from Bihar a decade ago.

As the smoke clears and dust settles on the riot-hit localities of Northeast Delhi and the nation counts the dead—47 and rising—stories of families leaving their homes to “safer places” begin to emerge. More than 3,000 people are believed to have migrated to their relatives’ homes or privately-managed reh­abilitation camps in nearby colonies. Many have left for their home states. But no official estimation of loss of private property and...