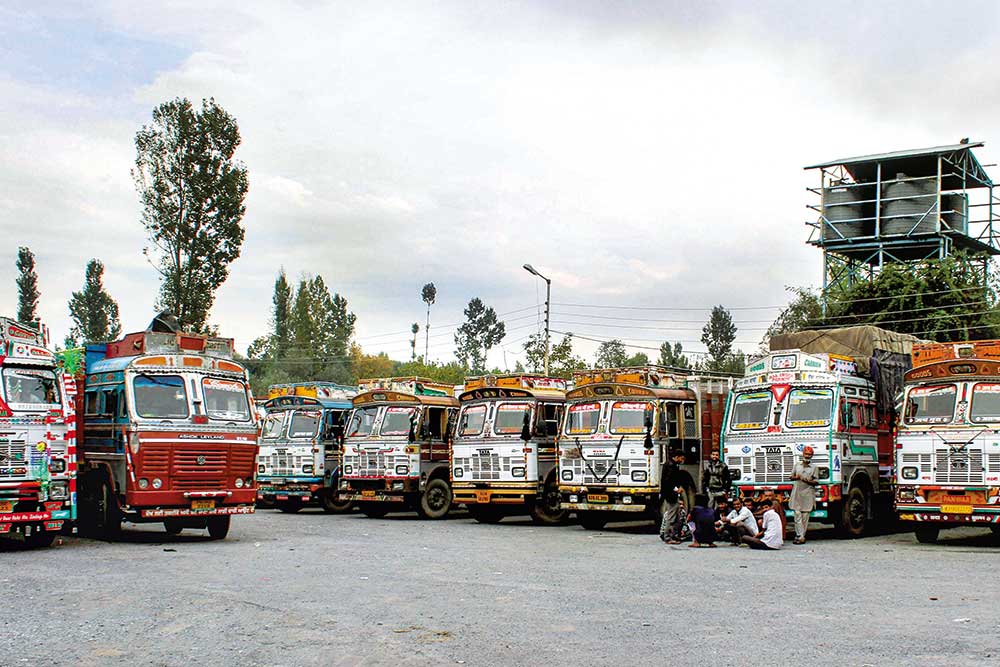 Trade Corridor
‘Safe zones’ such as this one in Shopian have been set up for fruit dealers following the killings
Photograph by PTI
Naseer Ganai October 23, 2019 00:00 IST Bloody Apple Trade - J&K's Fruit Trade Pierced By Bullets, Article 370 In Focus Again

The recent killing of three non-Kashmiris in the Valley has sent shock waves among non-local transporters waiting to ferry apples out of the region. Apple traders Charanjeet Singh and Sanjay Charaya were attacked at Trenz in Shopian district by a group of three or four armed men around 7.30 pm on October 16. A local fruit grower rushed them to the district hospital in Pulwama, where Singh was declared dead on arrival. As Sanjay’s condition was critical, he was shifted to the SMHS hospital in Srinagar. Hailing from Punjab, Charanjeet and Sanjay had gone to Trenz, where 10 labourers from Punjab were loading boxes of app­les on a truck.

Sanjay’s family flew to Srinagar on the morning of October 17 after they heard about the attack. Jaspal says all labourers from Punjab have gone back. Sanjay’s father, Jaspal Charaya, says “unknown gunmen” fired three bullets at his son. “Doctors say it will take him at least six months to recover,” he adds. For the past few years, Sanjay had been transporting apples from the Valley to Punjab and...