'India In Many Ways Is My First Home'

The Hollywood star on his unstarry avatar -- lobbying for human rights and self-determination for Tibetans. 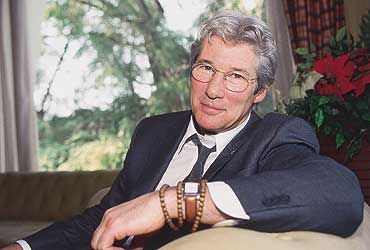 outlookindia.com
-0001-11-30T00:00:00+05:53
Once dubbed the World's Sexiest Man, Richard Gere, the star of such Hollywood blockbusters as Pretty Woman and An Officer and a Gentleman, has an unstarry avatar. He heads the International Campaign for Tibet, a 14-year-old Washington-based organisation lobbying for human rights and self-determination for Tibetans. Last week, Gere was in India to promote his twin pet causes: Tibet and AIDS. The 53-year-old dapper actor-activist and practising Buddhist—who started out with Zen in his early 20s, and now meditates for "anything between 45 minutes and two hours every day", practises tai chi and wears a Tibetan bead bracelet—spoke to Soutik Biswas in a New Delhi hotel. Excerpts:

How does the International Campaign for Tibet work?
We work very closely with Democrats and Republican legislators. A lot of our people can walk into almost any office in Washington. Now we need to replicate this success in Europe.

So, it's mostly lobbying with lawmakers to pressure China on Tibet?
Absolutely. What's interesting about this is that no power or money...