In The Land Of Babycakes

Making babies is fun, having them is not. Of all of life's events, becoming parents is the most conservatising. Any pretensions to radicalness are the first casualty. But... 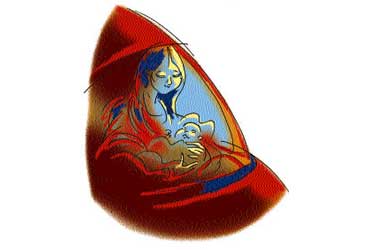 illustration by Jayachandran
Anita Roy January 13, 2003 00:00 IST In The Land Of Babycakes

outlookindia.com
-0001-11-30T00:00:00+05:53
The journey back from the hospital was only six miles but it felt like a long journey to an entirely new country. We had crossed the Rubicon to join the tribe of parents. I felt like a refugee—passport-less, dazed, and somehow slightly fraudulent. I kept expecting some official to emerge, cough politely, mumble something about a mix-up, and take the baby back. I looked out of the car window, to remind myself that the world was still the same—the clouds still grey, the tree trunks still black with rain, the traffic lights still changing from red to amber to green and back—just like yesterday. Then I would look at our baby son, 16 hours old, to remind myself that he exists today, and everything had changed.

He feeds, sometimes in a frenzy, searching for my nipple like a shark scything through a school of tuna. At other times, getting mouth to breast is as delicate an operation as docking the Mir Space station. While he sucks, his hands float to one side and stroke the air as though he were Krishna playing his flute. I'm drawn to him like the most love-sick, dumb-struck...