In Search Of A Lost Revolution 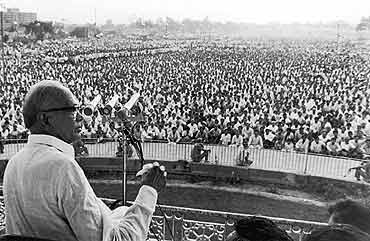 outlookindia.com
-0001-11-30T00:00:00+05:53
"Experience has shown that present-day mass elections, manipulated by powerful, centrally-controlled parties, with the aid of high finance and diabolically clever methods and super media of communication, represent far less the electorate than the forces and interests behind the parties and the propaganda machines."
—A Plea for Reconstruction of the Indian Polity, 1959

Jayaprakash Narayan was born a century ago (October 11, 1902) in Sitabdiara, a riverine village on the Bihar-UP border. He became, after Gandhiji, the most effective proponent of non-violent mass action to achieve grassroots political and social change. His leadership of the Bihar movement in 1975-76 provoked Indira Gandhi to declare an emergency, detaining him and the leaders of several parties who joined the movement. Further history was made when they combined to form the Janata Party and thrashed the ruling Congress in the 1977 general elections. Even Mrs Gandhi was trounced at the polls. But the Janata government fell apart and JP died disappointed two years later.

This was enough to...