In A Sex Warp

Though a Thrissur court allows two lesbians to cohabit, society's sanction is yet to come 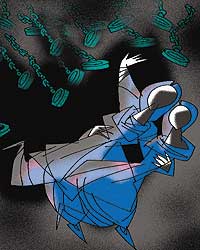 outlookindia.com
-0001-11-30T00:00:00+05:53
Kerala has only a progressive veneer. You only need to scratch its skin to see that notions of alternate sexuality and associated terms like gay and lesbian—supposed to be acceptable forms of sexual behaviour in an emancipated collective consciousness—are pejoratives. Such is the social stigma that a lesbian couple—Shaibi (22) and Prema (23)—who were granted permission to live together by a magistrate's court in Thrissur last fortnight, have gone underground now. No one, not even their families, know their whereabouts. The girls seem to have literally vanished without a trace.

The media attention the case attracted has apparently forced the girls to leave their home and quit their jobs. And for the nursing agency that employed them, mum's the word. Activists working with lesbians accuse the media for going overboard in its reporting. Says Devaki Menon of Sahayatrika, a counselling agency for lesbians in Thiruvananthapuram: "This happens when the media steps in. Media attention always has a negative impact." Other activists also accuse the media of sensationalising a...