Sehwag reminisces about the innings 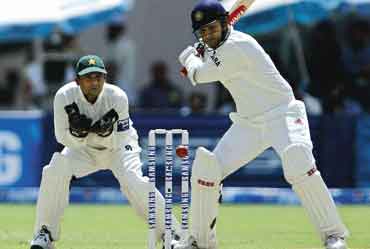 outlookindia.com
-0001-11-30T00:00:00+05:53
Who can forget Virender Sehwag's 309 against Pakistan at Multan, the highest Test score ever by an Indian. He also became the first batsman on earth to reach a Test triple century with an overboundary. Sehwag reminisces about the innings in a talk with Debashish Dutta:

When did you think you could get to 300?
I never thought! After the first day when I came back, I was I think 228 not out. At that particular point in time, I told myself that if I could bat for an hour the next day, I would reach 300. However, if you remember, I could score only 10-20 runs in the first hour of the second day's play. After that, I started slogging. It was certainly my day.

Had you forgotten about 281, the previous highest score by an Indian, V.V.S Laxman, against Australia?
No, I hadn't. In fact, when I crossed 281, my idol Sachin Tendulkar came down from the non-striker's end and congratulated me.

What was Sachin's advice then?
He suggested that I should keep playing the same way and no way was I to miss the triple hundred. He said there are...