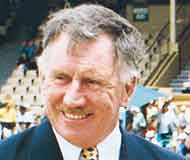 outlookindia.com
-0001-11-30T00:00:00+05:53
As one of the founding members of the Ceat cricket awards, what do you feel goes into making a cricketer of the year?
These awards recognise a complete cricketer, in both odis and Tests. It's about being a good all-rounder.

Like Ricky Ponting, this year's winner.
He's having an unbelievable time since his marriage 18 months ago. People say marriage isn't good for sportsmen. But for Ricky it's proving otherwise.

And Australia is the international team of the year. Is this the best team ever?
Certainly not. But it is surely one of the best.

But it is a far depleted XI in India right now.
Any opposition that takes an Aussie team lightly does so at its own peril.

Did Steve Waugh's exit disturb team balance?
They lifted the World Cup without him. A good team's all about filling in for vacant places.

And Hayden's run with the bat...
He is mentally so very strong. Hayden's been at it for three years now. He's been amazing.

Looking forward to India's tour to...