I Say, Three Cheers For Ayaan

Even if she unfairly blames Islam for all atrocities on its women, hers is a significant voice on their behalf 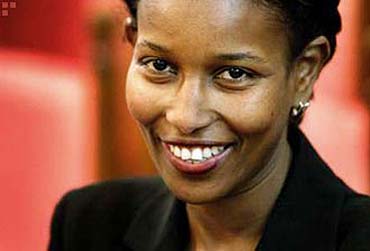 outlookindia.com
-0001-11-30T00:00:00+05:53
Ayaan Hirsi Ali, a Muslim by birth, is a daring woman. She has dared to raise questions despite knowing that a Mussalman is prohibited from raising any question on Islam. But these questions are hardly new. They have all been raised before at different times. Yet Ayaan’s questions come from a novel experience not shared by many. She wrote the script for the film Submission, for which Dutch director Theo Van Gogh died on Amsterdam’s roads. Before this, Salman Rushdie’s Japanese publisher was killed for committing the sin of publishing his books; even his Norwegian publisher was shot. But there’s a difference between Rushdie and Ayaan: Rushdie is a writer; he never declared jehad against Islam. Ayaan, on the other hand, dreams of abolishing all the misdeeds and terrorism that have arisen out of the faith.

Though born in sub-Saharan Africa, Ayaan’s seen, at very close quarters, the life of an immigrant Muslim community in a Western European nation. She entered politics while fighting the repression of women of her community and...