Will the gang of four arrested for the recent blasts lead to the rest of the iceberg? Updates 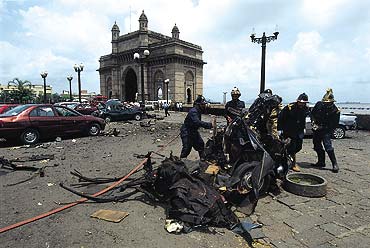 Five days after their arrest on August 31 under pota for the bomb blasts at the Gateway of India and Zaveri Bazar, the gang of four have not opened up to their interrogators. According to police officials who have questioned 45-year-old Dubai-returned electrician Sayyed Mohammad Hanif, his burkha-clad 37-year-old wife Fahmeeda and 16-year-old daughter Farheen, the family has confessed to their crime. But beyond a few logistical details, nothing more on the real mastermind behind the attack has emerged. Neither has their collaborator, 25-year-old zari worker Ashrat Ansari, who took the bomb-laden taxi to Zaveri Bazaar, been very forthcoming.

The foursome claim to be part of a new terror module—the so-called Gujarat Muslim Revenge Force (GMRF)—which was apparently created to avenge the atrocities on Muslims during last year’s riots. Before the August 25 blasts, this GMRF...