How Does One Weigh Hate? In... 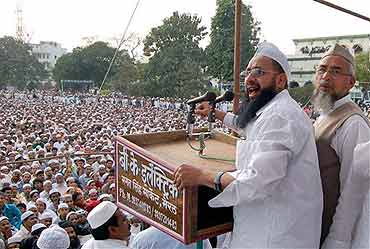 outlookindia.com
-0001-11-30T00:00:00+05:53
Haji Yaqub Qureshi, minister for minorities welfare and Haj in the Mulayam Singh government, is "ready to sacrifice his life" but will not go back on his word. And that word is the Rs 51-crore reward he had announced for the heads of the cartoonists who drew caricatures of Prophet Mohammed in Danish newspaper Jyllands Posten. Qureshi has declared himself to be an "ashiq-e-Nabi" (in love with god) and an "ashiq-e-Mohammed" (one who loves the Prophet). "I’m willing to be hanged a hundred times for my devotion to Hazrat Mohammed," he says. Qureshi, incidentally, sees an American hand in the whole cartoon controversy and has threatened to welcome President George W. Bush with black flags.

It was on February 17 while addressing a meeting at his hometown Meerut that the minister announced the reward, which also included weighing the "daredevil person in gold". The announcement created a furore. Although Qureshi clarified that he did not make the statement in his capacity as minister, the Opposition demanded his immediate resignation. While Mulayam clammed up on the issue,...