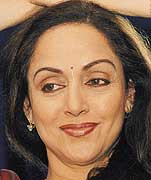 outlookindia.com
-0001-11-30T00:00:00+05:53
Bollywood is going through one of its worst times.
Because the stories it churns out have become far too repetitive. But, at the same time, you cannot ignore the great strides it has taken on the technical side.

What are your plans for films?
These days I am busy doing Baaghban with Amitabh Bachchan. It is an interesting project.

After so many years in the industry, are you being choosy now?
All through my career I have been portraying a wide variety of roles. Now I am taking only those roles which suit me or go with me.

How would you assess Esha?
I would say she's got a very promising future. I thought she did a wonderful job in Na Tum Jano Na Hum.

Why was Dharmendra against her joining films?
See, we come from a conservative family, and it was expected he wouldn't approve of it. But soon he realised that these days well-educated girls from reputed families join films.

As a star-kid, would you say she'd face problems in her career?
Being compared to your parents is a major...