Heal The Breach Of Faiths

The belief that Ayodhya was Rama's birthplace has no basis in history. But religion isn't governed by history.
Free Speech: Your take 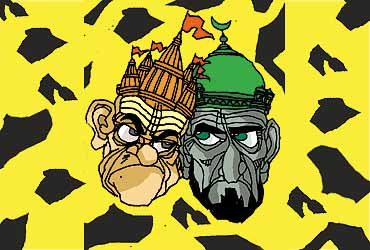 outlookindia.com
-0001-11-30T00:00:00+05:53
The BJP has relented neither to pressure nor temptation and has refused to make a commitment to build a temple at the site of the now-demolished Babri Masjid. This has brought both its leaders, Atal Behari Vajpayee and L.K. Advani, great credit. Such restraint, at a time when all opinion polls are showing a sharp decline in the BJP's popularity in UP, shows the party in a positive light. More importantly, it does a world of good to India's political pluralism. But has the time not come for all the protagonists in this 16-year-long political struggle to stop flogging the horse of religion and let the larger purpose of nation-building guide their future actions? Such a reappraisal is long overdue because the fears and grievances of Muslims and Hindus, that had permitted the politicisation of what was previously a local issue, have proved groundless.

The first essential step in this direction is to demystify the dispute itself. As historian Sushil Srivastava has shown, there's abundant archaeological evidence to confirm that no temple built by Vikramaditya in the 5th century AD...