The Outlook report on the Shankaracharya illustrates its double standards 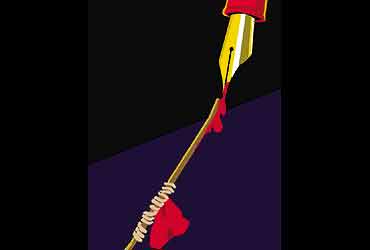 outlookindia.com
-0001-11-30T00:00:00+05:53
Swami and Fiends, along with the inset How to Cash In (Outlook, Nov 29), on the Shankaracharya affair, was a typical trial by the media. It was also in line with the general editorial policy of Outlook to 'cash in' on any opportunity to nail those who believe in the spiritual traditions of this ancient land. Facts, as usual, were either twisted or cooked up to hit predetermined targets (read Hindutva forces, BJP/RSS). The report says, "This is not the first time Jayendra Saraswati seems to have organised an attack through goons". Outlook pronounced him guilty even before the trial! The report is based on half-truths and rumours. Innuendoes and baseless allegations levelled by known enemies of the math and the police have been produced with suitable exaggerations as part of a 'journalistic investigation'.

"Over the years, muck has been accumulating behind the math walls. Hard to believe, but scandalous stories of sleaze, debauchery, greed and sex...