So breathless with righteousness that it ends up not speaking to the audience at all. 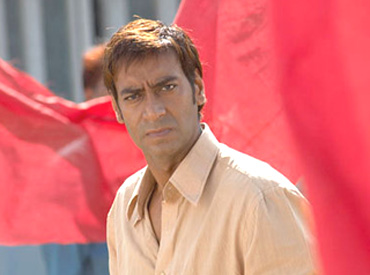 Bollywood rarely gives encouragement to social causes—hundreds of chronic injustices are ignored by India’s most powerful medium and its most emulated public figures. So Rajkumar Santoshi, in Halla Bol, has decided to take cognisance of all of them in one go, while also taking a look at his industry’s conspiracy of cheerful silence. But the road to movie hell is paved with good politics. Halla Bol is so breathless with righteousness that it ends up not speaking to the audience at all. Ashfaque Khan (Ajay Devgan) is an idealistic actor in a street-play troupe led by Sidhu (Pankaj Kapur). Sidhu despatches him to Mumbai, where naturally he becomes Bollywood’s brightest star. He changes his name to Sameer Khan (which sounds an awful lot like Aamir Khan). Sameer’s success saps his idealism, until one night he becomes...