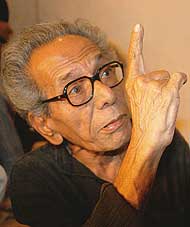 outlookindia.com
-0001-11-30T00:00:00+05:53
What provoked the mob to attack you?
It is all political. There is nothing provocative in the drama. It is a folk play which is being enacted in the villages for the last 60 years. I haven't written it. Only the play is enacted by my artistes.

Have you faced such problems in the past?
Not at all.

Are you being targeted because you are a Muslim?
Yes, it is one reason. They argue that being a Muslim, I have no business meddling in the affairs of the Hindus.

Do you agree with it?
Not at all. I will be very happy if a Hindu goes ahead and exposes the mullahs and the maulvis.

Who do you think is behind all this?
The Sangh parivar. They are not making any attempt to hide their identity.

Was there any lapse on the part of the administration?
They could have been more alert. The policemen turned up with teargas shells only after the collector and SP reached the place. I don't understand why they couldn't anticipate trouble.

Who is organising this tour?
The state government's...