Grin And Bear It

So the grinches stole Christmas and your faith in democracy. There's more to life. Isn't there? Cricket? Um.... The economy? Well, whatever. Just... 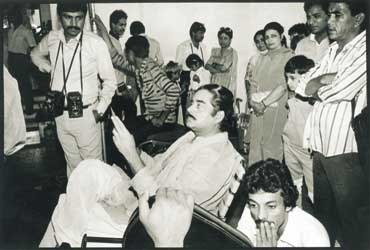 outlookindia.com
-0001-11-30T00:00:00+05:53
In Stuart Little 2, the protagonist (an animated mouse) asks his human foster father where the silver lining might be found during a particularly dire passage in his life. It's a question some readers of Outlook might have asked themselves when Narendra Modi won the Gujarat election. Even the politically correct sometimes want a break from the strain of high-mindedness, even the solemnly secular want a holiday week on the lighter side of the moon. What might make us laugh in the run-up to this new year? By us, I mean those of us who didn't laugh with delight when Modi won; the ones who did don't need cheering up, for them, life's been a riot for a while.

If the swearing-in of a chief minister is anything like the investiture of a beauty queen, Modi will smile in a sash, be hugged by Kamal Nath and commit himself to world peace. This is more or less what he did when he promised to rule on behalf of even those who voted against him.

Narendra Modi favours ceremonial turbans over the tiara; he wears a beard already and the word is that he wants to be known...