Got A Gun And Thick Skin 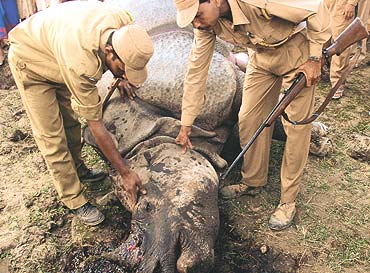 Life usually is a peaceful haven for the Great Indian one-horned rhino (rhinoceros unicornis) at the famed Kaziranga National Park in eastern Assam. But sometimes the stillness of this Eden is rent through by sudden violence—and another unsuspecting pachyderm falls prey to predatory poachers, succumbing either to gunshots or falling into a pit carefully laid out for it.

It was no different last fortnight at the makeshift jetty along the Dhunsiri river, near the park. Park director S.N. Buragohain, ranger...