The Kannada filmmaker whose Dweepa won the Swarnakamal for the best film in 2002, discusses serious cinema on the eve of the premiere of his Hasina. 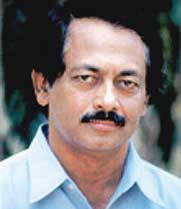 Do multiplex platforms offer hope for such films?
This one-off release is not going to solve the imbroglio.

What is the imbroglio?
Multiplexes mostly screen English and Hindi films with glamour. Good Kannada or Tamil films get labelled and sidelined as 'regional'.

What is the solution?
Ninasam enabled a revival of Kannada theatre. Cinema needs a similar movement.

Any other alternatives?
Cinema must be included in school curriculum. In Karnataka we almost pulled it off under the J.H. Patel government. I have seen children respond positively to Pather Panchali and Bicycle Thieves.

What about the role of film societies?
Many have petered out as they don't get films. In Karnataka, we have only two societies. But to watch good cinema in society screenings is segregation too.

What about Doordarshan?
Most good...