For the last one year Anju has been hovering between fourth and fifth in the world. This is no mean achievement for someone who has just completed one year in the Grand Prix grind. 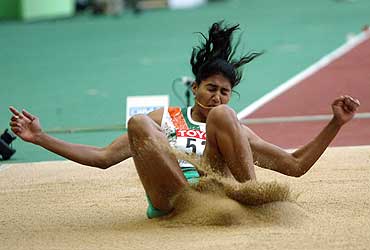 Anju Bobby George is a rare Indian athlete who has excelled in field events in the international arena. All the legendary Indian stars like Milkha Singh, Gurbachan Singh Randhawa, Sriram Singh, Shivnath Singh, Hari Chand, P. T. Usha emerged on the track. Field events were considered a weak link in Indian athletics. But with a series of good performances on foreign soil, Anju changed the mindset of people, at home and abroad.

A bronze in the Manchester Commonwealth Games, a gold at the Busan Asiad and a bronze again in the World Championship in Paris is stacked on her mantelpiece. A medal in Athens can complete her Grand Slam of athletics.

Anju may have often faltered with her opening jumps in the recent European circuit. But she is consistent with her world ranking. For the last one year she has been hovering between fourth and fifth in the world. This is no mean achievement...