With its formidable acting talent, should've been a whole lot better. And it would, if the actors had a better script to follow. 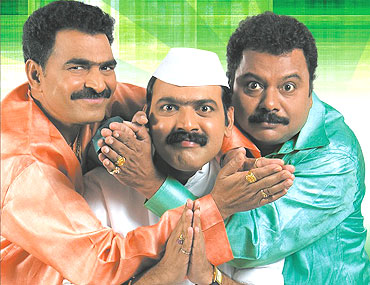 As the title Gallit Gondhal, Dillit Mujra (Chaos in Your own Lane, a Salute in Delhi) suggests, the film is on a political theme. It’s about politicians who create chaos in their own backyard but are ever willing to bow down to the party leadership in Delhi.

It’s election time in Maharashtra. Sworn enemies Bajirao Dole, the village head, and Chandrakant Tope, the sitting MLA, are both in the race for a ticket. They’ll stop at nothing to prevent each other from reaching that magic goal. Aiding both in their mission is Narayan Wagh, a crafty party worker who has political ambitions of his own. He manages to keep them under wraps, even as he pretends to be faithful to both Dole and Tope. He’s willing to bide his time for the master move at the end.

There was potential here for some racy drama. Like...