From The Barrel Of A Gun 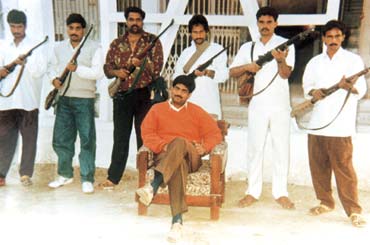 outlookindia.com
-0001-11-30T00:00:00+05:53
"I'll kill him even if I've to chase him to Rajasthan. No one can save him now."
Siwan MP Mohammed Shahabuddin's tirade against SP Bacchu Singh Meena who led the police raid on his house

Bihar is a classic microcosm of what the heartland is all about—the natural and easy cohabitation of politics and crime. And if that microcosm ever needed a nanoworld, the obvious choice would be Siwan. The district has the distinction of one murder every two days and nowhere in the state does the cult of katta (country-made pistols) symbolise power and ensures political supremacy more than here.

Siwan's MP Mohammed Shahabuddin rules the district with an iron hand. Accused in more than 30 cases, the MP's word is the law here and anyone who dares to defy him is met with threats and even death.

The trigger-happy Shahabuddin has flourished for the past 10 years without any interference. But this unspoken rule encountered an exception last week when the 'terror of Siwan' was challenged in his own den by the police, resulting in a six-hour-long gun battle which left 14,...