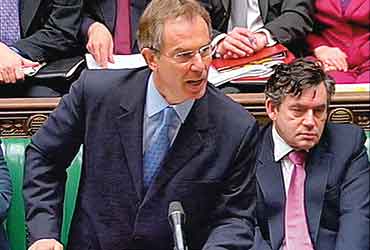 outlookindia.com
-0001-11-30T00:00:00+05:53
American and British forces never were going to knock on the gates of Baghdad, they were going to knock them down. For more than two weeks now, getting to Baghdad had been the target. And then? The push to Baghdad, like one of those arrows curving around on television graphics, got there and stopped. The graphics, like the military tacticians, did not seem to know where to go from there.

"All they have done is drive through a desert," Hani Lazim, an Iraqi who has spent 20 years in London campaigning against Saddam Hussein, told Outlook. "But see how it's being projected as a success. Remember World War II? It was the Russians who destroyed Hitler's forces. But look at all the Hollywood movies about the war. Americans are the heroes, there are no Russians to be seen."

Lazim and many who oppose the war see a Hollywood-isation of this conflict too. The greatest challenges of the war come not on ground and air but in print and air time. Watch the press conference called at Central Headquarters in Doha

at 3 am to announce the rescue of private Jessica Lynch...