Images do not lie. Even if they are a sting operation or a political checkmate by the opponent. Updates. 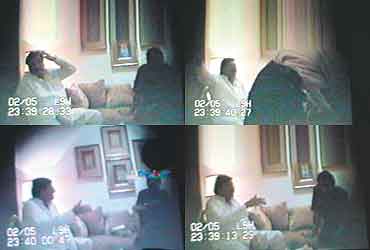 outlookindia.com
-0001-11-30T00:00:00+05:53
"This scandal came as a great favour from God. It is a boon from the heavens."
—Chhattisgarh chief minister Ajit Jogi on his BJP rival Dilip Singh Judeo caught accepting money on camera

A moustache had become a symbol of political pride in Chhattisgarh ever since Dilip Singh Judeo threatened to shave off his very fine pair if he failed to defeat Ajit Jogi in the assembly polls. But a hidden camera, a grainy television image of cash being handed to him and a bizarre remark about money being equal to God, dashed all Judeo's dreams of puffing his chest out and twirling that well-groomed moustache. It also sent the BJP, both at the Centre and in the states, reeling in shock. As Jogi said at every public rally thereafter: "Unhone muche nahin/apni aur BJP ki naak kata di (He's not shaved his moustache but he's brought dishonour to himself and the BJP)."

Judeo himself cut a sorry picture when the Outlook team went to meet him after sun-down, the day the scandal broke. Slurring, he mouthed several obscenities in Hindi. "To hell with everything. This...