For God's Sake, It's Cricket

Was it an overkill of piety that failed the Pak team at the Cup? Updates 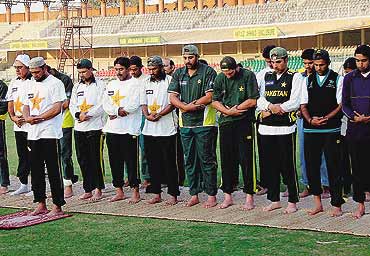 Weeks before Pakistan disastrously bowed out of the 2007 World Cup, and coach Bob Woolmer was found murdered in his hotel room, Outlook had featured a story in its March 12 issue detailing the stifling control the Tableeghi Jamaat (TJ), or the party of preachers, had over the cricket team. We identified these Islamists as the inspiration behind the players' intense religiosity, their penchant for flaunting their Islamic identity, as also the devastating cause of splitting them into two groups—TJ and non-TJ. Then some considered it insensitive to publish what could demoralise the team preparing for the most important tournament on the cricketing calendar. Even former Test opener Mohsin Khan, who in the story had been sharply critical of those who believed religion could be harnessed to improve performance on the field, thought Outlook should have...