It is unfair to judge a first novel by what it has not, only right to look at what it has. This one reveals enormous confidence, crafting skill and, above all, promise. 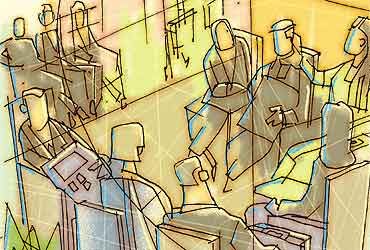 outlookindia.com
-0001-11-30T00:00:00+05:53
When I hear the word cuisine," says a character in Joyce Carol Oates’ American Appetites, "I reach for my revolver." I have the same feeling when I hear the word ‘Indianness’ used in connection with English writing in India. Thankfully, Rana Dasgupta, unlike many young Indian writers, deftly bypasses this idea in his first novel, Tokyo Cancelled. It begins (a splendidly gripping beginning) in an unspecified airport where a Tokyo-bound plane has landed due to a snowstorm in Tokyo. While most passengers find a place to stay for the night, 13 have to stay back in the airport. One of them decides to tell a story and the others follow.

Stories-within-a-novel is an often-used ploy, but for a first novel, it is a rather daring one, specially since the stories are the novel here, carrying the entire burden of it. Set in different parts of the world, they combine the real world with fantasy, futuristic technology with magic: a database of memories is created to be sold to a world in which memories are lost, a woman turns into a departmental store and humans sprout...