Everyman Is A Midas

The Padma Bhushan comes too late. His audience had made Bengali actor Soumitra Chatterjee an icon long back. 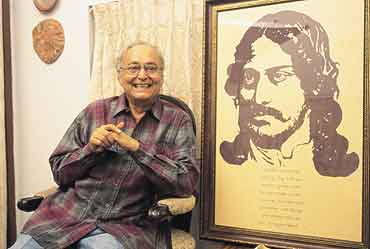 outlookindia.com
-0001-11-30T00:00:00+05:53
"Must I talk now? Look, I'm doing a role, the show is on, this is no time for talk...maybe tomorrow...." A tacky greenroom on a south Calcutta field, the jatra show Bring Back My Daughter has just begun. Soumitra Chatterjee, all wild grey unkempt hair, patched trousers, dirty muffler, the innocent ex-convict looking for his long-lost daughter, is supremely indifferent to the news that the government has decided to award him the Padma Bhushan.

It was 10 pm when the news came in. Soumitra was practising his lines for the jatra's second scene, his feet up on a chair, when fellow actors Sreela Majumdar and Tarun Haldar burst in. Then came the newsmen. A sense of ceremony asserted itself. Someone produced a bouquet. Someone else had the presence of mind to make a public announcement about his Padma Bhushan, which sent the audience into rapturous applause.

But the man himself—arguably India's finest living actor and one of Bengali cinema's biggest-ever stars, Satyajit Ray's on-screen alter ego—was nonchalant. "I have no reaction," the 70-year-old thespian told...