Two top Bangladesh terrorists are caught, but an iceberg lurks 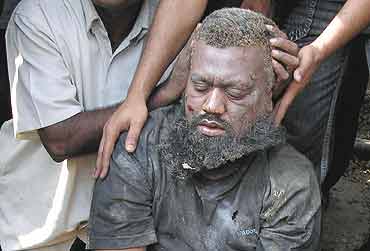 outlookindia.com
-0001-11-30T00:00:00+05:53
Troubling Facts
When Jamaatul Mujaheedin Bangladesh (JMB) supremo Shaekh Abdur Rahman surrendered to the Rapid Action Battalion (RAB) personnel who had surrounded his hideout on March 2 in Sylhet district, it was only a matter of time before his protege Bangla Bhai too got caught. Nobody in Bangladesh was surprised at his arrest on March 6 from a remote village in northwestern Mymensingh district, where he and his aide were hurt in a blast they had triggered to ward off the RAB personnel from nabbing them.

Once described by the Dhaka government as a mere "media creation", Abdur Rahman has revealed during interrogation that bombings in cinema halls, assassination bids,...