ET, Give Me A Tinkle!

India is well placed to do some serious cosmic pow-wow—both geographically and, hmm, culturally 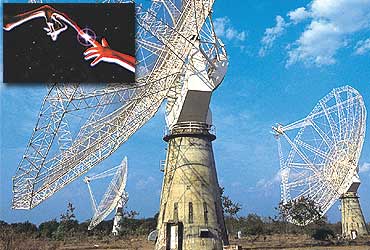 outlookindia.com
-0001-11-30T00:00:00+05:53
In the late sixties, Satyajit Ray wrote a story of a diminutive, benign humanoid creature that lands in the boondocks of Bengal in a spaceship and makes contact with a simpleton. The Alien, a story of fantasy and human frailty, never got made into a Hollywood film that the auteur dearly wanted. But four decades on, Indian scientists seem to have taken up the thread, joining the search for clues to the world’s most exciting riddle in right earnest: is there life in outer space?

Two years ago, evidence surfaced of living bacterial cells in the earth’s upper atmosphere from a joint project involving Indian and UK-based scientists. In this ISRO-funded research, space balloons containing cryogenically preserved cylinders were sent to outer space to collect cosmic samples. The samples tested later revealed bacterial and dna contents, prompting efforts at another similar balloon sortie by ISRO this winter. And now the Giant Metrewave Radio Telescopes (GMRT) in Narayangaon, 80 km from Pune, are attracting the attention of the world-famous California-based Search for...