India's partial demobilisation has still ceded the political high ground to Islamabad, due to its refusal to engage in talks. 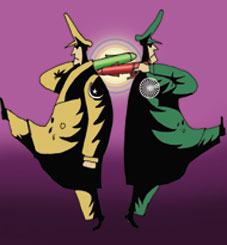 outlookindia.com
-0001-11-30T00:00:00+05:53
Where do India and Pakistan stand after announcing troop withdrawals from the international border? What are the likely consequences of the crisis, now partially winding down? The most likely one is that leaders in both countries will continue to misread each other. Very different lessons seem to have been learned from the standoff, which bodes ill for war prevention and escalation control in the future.

One reason why misconceptions abound is that strategic analysts in India hold very different views about this exercise in coercion-through-mobilisation to influence Islamabad and Washington. Some believe the threat to go to war was a success, extracting by means of the Bush administration a pledge from Pakistan to stop facilitating terrorism across the Kashmir divide. In this view, mobilising the Indian army realigned US policy towards terrorism in the region—which had wobbled due to the exigencies of fighting inside Pakistan against the remnants of Al Qaeda. Others view it as a misuse of the army that weakened Indian credibility.

Within Pakistan, there appears to...