The erstwhile Iraqi dictator was no world threat, a pawn of the West, used and discarded. His very real atrocities against the Shias notwithstanding, is the occupying US doing any better? 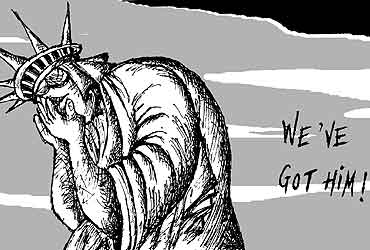 outlookindia.com
-0001-11-30T00:00:00+05:53
The Coalition Provisional Authority in Baghdad is claiming the capture of Saddam Hussein as a great success. In language worthy of his president, chief US administrator in Iraq Paul Bremer announced at a hurriedly assembled press conference, "We've got him." An army general who gave an extensive illustrated briefing of the capture described him as having been "caught like a rat". But Saddam's capture is not a great victory. It is at most a footnote in history. And it is not even a significant footnote. Had Saddam been skilfully masterminding the attacks on the American occupiers, it might still have been that. But as the circumstances of his capture showed, all he had been doing for eight months was hide in one small hole after another dug for him by close members of his tribe. Throughout this time he had been in touch with almost no one. So the question of masterminding a ongoing guerrilla war did not arise. Instead, what we saw on TV was a tired, haggard old man who had lost hope long ago but did not lose his dignity even while being subjected publicly to humiliation that no white...