An Actor As A Trilogy

Poet, artist, playwright, editor...there was a manyness to Soumitra as a creative mind. And a depth of feeling. Both flowed into his roles on screen. 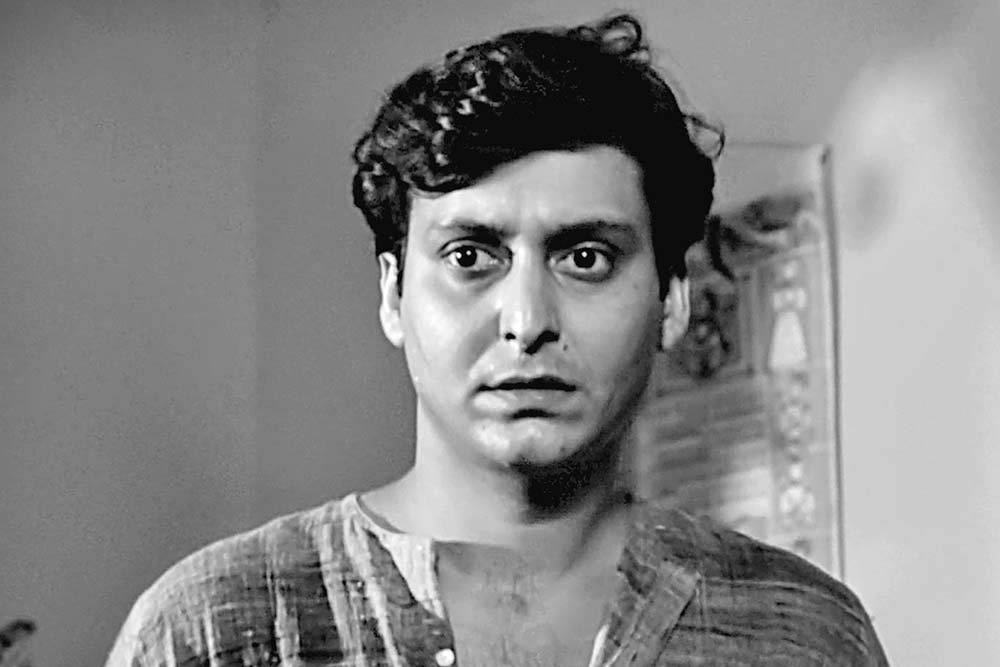 I belong to a generation that has grown up with the films of Satyajit Ray and his favourite hero, Soumitra Chatterjee—revelling in an experience that should cause no controversy by being called rich, even if you consider only the sheer range of roles Soumitra-da covered over the years, beginning 1959. That story is still not over: there are still more films on the way, his last works. But for the last 10 years, I had been engaged on a different project, working with Soumitra-da very closely: editing a collection of his prose writing. The first two volumes came out in 2016 and they covered more than 1,000 pages. When he went, we were almost ready with the third volume, which will have another 500 pages.

The last conversation I had with him, rather the last phone call he made to me, was on September 9, late in the evening. He had just rediscovered a piece he had written in 2015 about a young writer, Ansaruddin—a very different kind of a writer, one who lives in a village close to the small city where he had grown up and spent his childhood, Krishnanagar, and now tills his little plot of land and writes. Soumitra-da had written him an open letter, and it had been carried by a little magazine published from Krishnanagar. A printout had duly reached me, and he wanted to know my reaction, and whether I would like to have the piece included in the volume.

He was full of admiration for this writer, the way he had brought into his works a completely different way of looking at life in rural Bengal—which has been the setting for some of the great works of the Bengali novelists Tarasankar Bandyopadhyay, Bibhutibhushan Bandyopadhyay and Manik Bandyopadhyay. Now, all of them, incidentally, were outsiders when it came to the life of the village. Sympathetic, perceptive outsiders, yet outsiders. And here was a man who handled the earth of that land...and all that came into his writing! Soumitra-da was charged with the originality, the extremely perceptive insights into the life of the village that emerged in the writings of Ansaruddin. 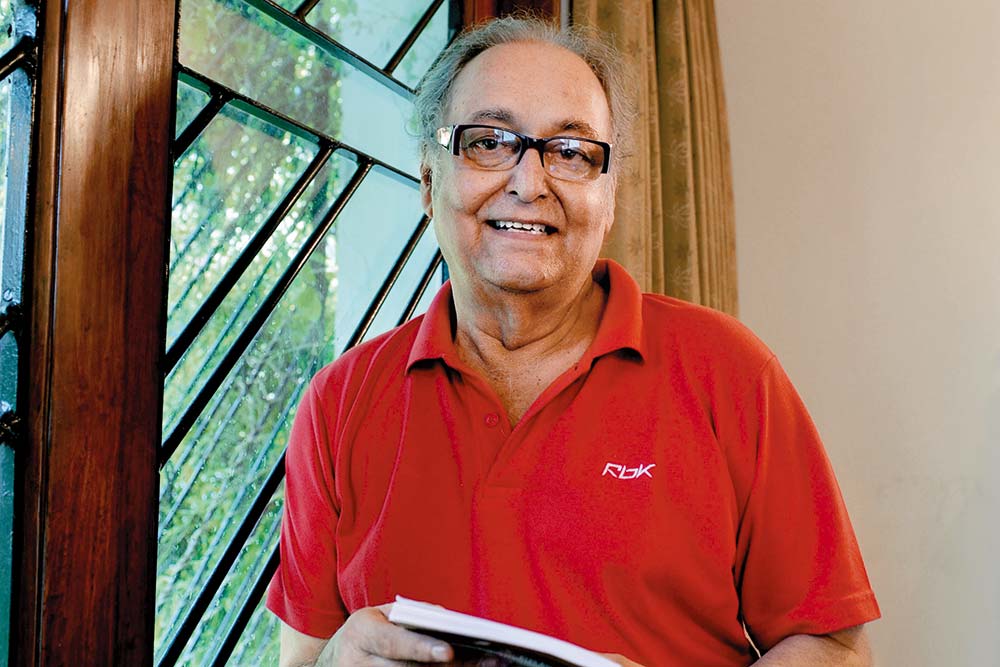 This entire conversation had nothing to do with cinema—but it had to do with life, literature, the whole world of rich experience on which Soumitra-da drew for his acting. He was not merely an actor; he also read and painted, he wrote poetry and recited them, wrote and dir­ected plays and acted in them. Living, in short, a full life of creativity.

In Abhijan, Soumitra played the role of a Rajput taxi driver, and the mix of bhojpuri and bangla he used in it he recreated for himself—an idiolect of one’s own for a role.

In 2016, he, Naseeruddin Shah and I were present at an event for the launch of his prose collection. Naseer asked the last question: “What were the influences on you as an actor when you began, and how has theatre altered over the decades or has it remained the same?” Soumitra-da’s answer covered his entire career in a brilliant summing-up. He said: “It is really difficult to track back to the beginning. The main influence that shaped me, my acting life, is pretty well known by now; it was Sisir Kumar Bhaduri. It was the Bengali theatre of that time that held sway over my mind...until I saw Pather Panchali and I became a cinema addict. However many Hollywood films I had watched by then, it had not let me form an idea of how I should act. But once I had watched Pather Panchali, it instantly lit a lamp in my mind. I realised, the camera is not to be forgotten, but it has to be taken inside you, because the camera is your audience. That’s how my idea about acting in cinema changed. As for my ideas about theatre, it has been changing constantly. At one time, I used to think that for an actor nothing is more important than exe­cuting the play at the most, interpreting the character one is playing. But later I started feeling this is not the play in its entirety. Later still, I realised that theatre can be of many kinds. I did not believe in mus­ical theatre when I was young. Now I am convinced that the real theatre in India has a very strong musical heritage that should come back into modern theatre. Theatre can absorb resources from all mediums and holds infinite possibilities.” This was the fundamental openness of mind that he brought to cinema, a story that began in 1959.

Apur Sansar was the beginning of a relationship, a very special actor-director relationship which lasted not only through the 14 films by Ray in which he performed but also through so many other films by Ray—because he was one of the first readers of his scripts! Ray used to read out the scripts to him and share ideas. There were occasions when Soumitra-da would ask for a role and Ray would ‘reject’ it, but all his life Soumitra-da acknowledged the justice of Ray’s decisions. One of these ‘rejections’ came when Ray chose Tapen Chatterjee for the role of Goopy in Goopy Gyne Bagha Byne. Soumitra-da had the generosity to acknowledge and admire the abandon and spontaneity of Tapen in the role. That was what he was like, fundamentally able to like and admire a lot of his contemporary actors—Chhabi Biswas, Tulsi Chakraborty, Bhanu Banerjee, Jahar Roy and Rabi Ghosh—with a generosity of spirit that’s rare among ‘big’ actors. In fact, his great admiration for these actors was reflected in a number of his writings, essays devoted to these actors in which he analysed their acting styles, their distinctive approaches. 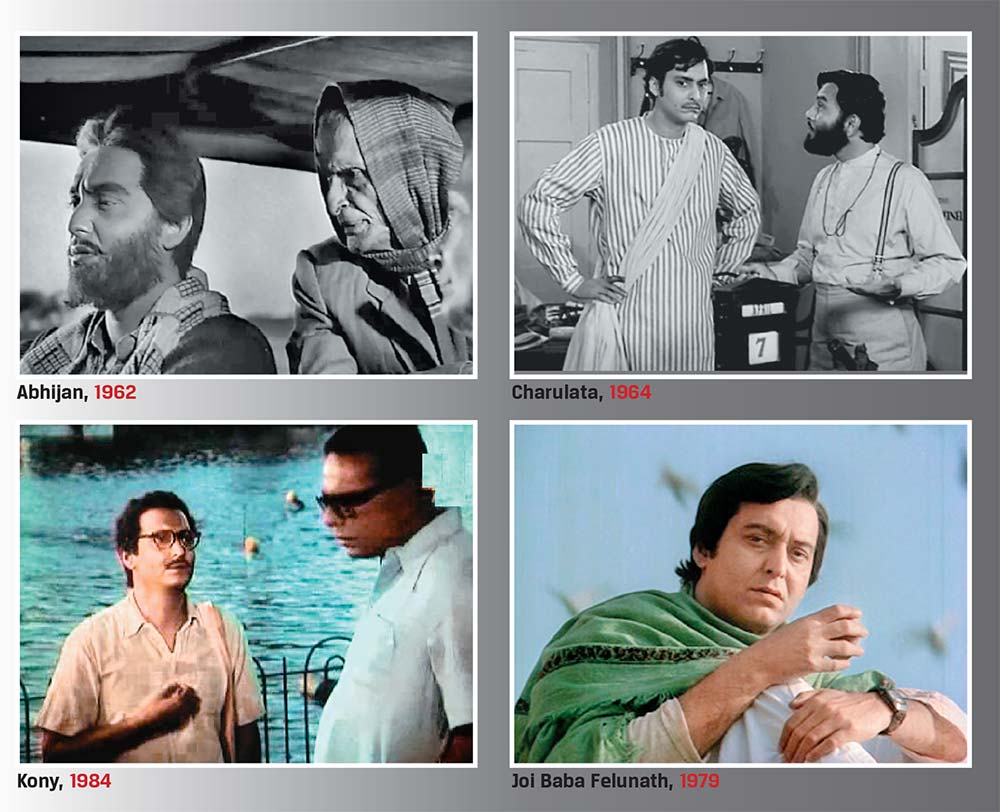 Soumitra-da loved to talk about his role in Ray’s Abhijan, where he played a Rajput taxi driver, and the language that he used, a mix of Bhojpuri and Bangla, which he had picked up from Bihari Rajput truck drivers he had encountered in his life. He recreated the language for himself, worked on it independently, and then went to Ray, spoke it out to him. Ray jokingly asked him if the patois would work in the romantic scenes! As a matter of fact, it indeed did. This was not absolutely authentic Bhojpuri Rajput dialect, it was one of Soumitra-da’s own making, but he made it credible and convincing. One needs a feel for language, an immersion in language, to be able to create an idiolect of one’s own for a role. That was part of Soumitra-da’s creative arsenal—as a poet who worked with the nuances of language, and possessed a sharp, sensitive ear. All these elements entered his characterisation.

Apur sansar started a special actor-director relationship with ray that wasn’t limited to 14 films, but others too! for ray would read out his scripts to Soumitra and share ideas.

All his life, he acknowledged yet another mentor: Tapan Sinha. Soon after Apur Sansar, Sinha had cast him as an antagonist to the reigning star of the time, Uttam Kumar, in Jhinder Bondi. Soumitra-da scored over the redoubtable star, and thus made his entry into the ‘commercial’, popular Bengali cinema, where he became one of the most enduring stars, retaining his giant presence till the very end of his life. All his life, he was conscious of the distinction between the two cinemas— ‘art’ and ‘commercial’. But to the large body of mediocre, run-of-the-mill cinema in which he was compelled to perform under the compulsions of domestic responsibilities (in  spite of the frugal, unostentatious life he lived), he gave his best—creating real ‘characters’ out of his banal assignments, with little support from the directors! Whenever the better directors gave him a challenging role, he would do his homework with a passion, as he did for his characterisation of a swimming teacher in Kony (1984), directed by Saroj Dey; or the wheelchair-bound physician in Sinha’s Wheelchair (1994); to his neg­otiation with creeping blindness in Goutam Ghose’s Dekha (2001); or as the retired history professor losing out to Alzheimer’s in the recent Mayurakshi (2017), directed by Atanu Ghosh.

Although it may seem counter-intuitive to say so, his performances for Ray’s works were in a way relatively easier—for one, there was the master at hand, and then he could fall back on his own probing understanding of Bengal’s cultural history from the colonial times, an area of interest Soumitra-da pursued with the literary periodical he edited, Ekshan. He shared that scholarly passion for 19th century Bengal with Ray: the latter would do the cover and design for Ekshan, the two would share books and engage in long conversations on that whole cultural swathe. In my long engagement with Soumitra-da, I could see a mind that worked through poems, drawings, his extensive reading in politics, in history, in literature, in the arts, a vigorously active mind working independently in each medium, but ultimately bringing all these aspects together in his performances. 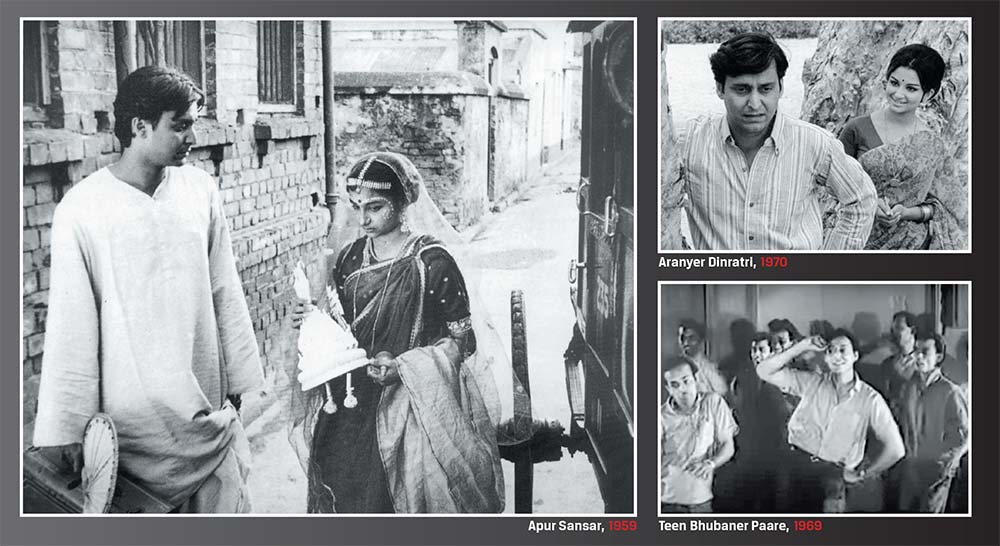 And yes, there was theatre. He had resumed playing on the stage for irregular, non-professional companies. Of course, he had performed in the 1960s in the professional, regular theatre where his plays would last for 300, 500, 700 performances spread over two to three years, thrice a week—a conception that’s now lost in memory. But his commitment was no less in the irregular performances with small groups. His liking for the theatre was a particularly keen one, as he told me, for theatre gives one the opportunity of recreating a role night after night. One can think over it, make changes—an opportunity cinema does not give. In cinema, one performance was the final performance. Theatre, on the other hand, afforded the scope for experimentation, development, transitions. It was a special challenge and Soumitra-da loved it.

A few months after being diagnosed with cancer in 2009, he wrote and directed The Third Act, hence, with three actors, dressed the same, playing three selves of the protagonist.

In theatre, his own directorial works included Naam Jiban, Nilkantha and Phera—an adaptation from the German play, Friedrich Dürrenmatt’s The Visit, with Madhabi Mukherjee as the rev­engeful, ‘betrayed’ lover taking it out on the character played by Soumitra-da. Ray’s Charulata, to whom he had played a subtly amorous Amal in that legendary film, in a kind of ironic inversion! Later, he would do Anthony Shaffer’s Sleuth and King Lear in Bangla, directed by younger directors like Kaushik Sen and Suman Mukherjee, for the non-professional, experimental theatre, foregoing his normal professional fees.

I remember a long conversation with him in a cab on our way to the AIR station in Calcutta, for an interview to be recorded for their arch­ives, sometime in June 2009. He was sharing with me his experiences in London, from where he had just returned after three months of a long series of medical tests that had confirmed his cancer, and the physicians had given him seven years! He gave me the information straight, and then told me of a play he had seen in London, called No Smoking, by a cancer survivor playwright, and he told me of his resolve to do his own autobiographical takeoff from it. A few months later, he was ready with it, with three actors, dressed the same, two male, one female, playing the three selves of the protagonist. He called it The Third Act, Hence. He carried on playing the third act of his life, his eyes wide open, his sensitivity alert till barely a month before the end came.