Dusty Tracks To the Bounty Bridge

Few models of poverty upliftment have transformed lives. Here is one which is near-perfect. 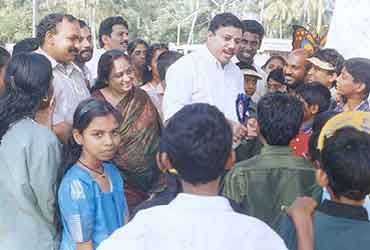 outlookindia.com
-0001-11-30T00:00:00+05:53
Forty-two-year-old T.K. Jose has done what no other bureaucrat, let alone politicians, has been able to do in Kerala. A glance at his achievements and you know it’s a pathbreaking effort. Aimed at removing poverty in the state by 2012, his Kudumbashree Poverty Eradication Mission has succeeded in bringing some 27 lakh families under its fold.

A tangible success of his mission has been that his below poverty line women volunteers today have savings worth Rs 305 crore. They have also disbursed Rs 510 crore as loans in just three years. The savings have come in the form of weekly single denomination rupee contributions from women volunteers. "We’ve created wealth out of poverty," says Jose, who turned the unglamorous poverty eradication venture into an opportunity for capacity building.

His close association with a bunch of similarly committed ias officers who had developed miniature models in a few wards encouraged him to give a new direction to the venture.

An MSc in statistics, plus an mba, Jose has closely studied deprivation. It was he who lent a new...