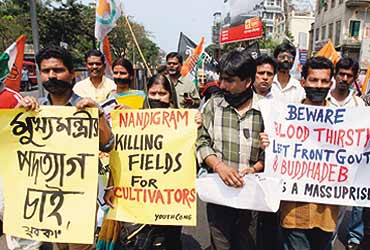 "Anarchy (as was stated to be prevailing at Nandigram) would not be tolerated and would be crushed with a heavy hand."
—West Bengal chief minister Buddhadeb Bhattacharya at a March 11 rally in Calcutta organised by the peasant's wing of the CPI(M).


The chilling words from Buddhadeb, with all their old Soviet punch, came to life two days later in troubled Nandigram. A 5,000-strong police force converged on this east Midnapore block—off-limits to the ruling CPI(M) in a two-month-long, sustained act of political defiance—to quell protesting villagers daring the might of the state machinery. Their land was at stake, about to be written away by the state to the Salim group of Indonesia to set up a Special Economic Zone (SEZ). Predictably, things caught fire—literally. In the end, the police had gunned down 14 protesters, wounded 71. They were certainly aiming to kill—the bullets had all hit the dead above their waist.

For the CPI(M), it was nothing short of a gigantic tactical blunder, at...