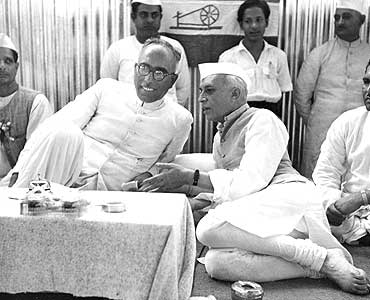 outlookindia.com
-0001-11-30T00:00:00+05:53
Sheikh Mohammad Abdullah (circa 1905-82), prime minister of Jammu & Kashmir (1947-53), has gone into almost total eclipse. Once, people encountered his voice everywhere, the key to his phenomenal influence in his lifetime. He made his mark not only by his oratory but by his incredible energy. With his death, however, his reputation declined rapidly. Today, alas, policemen guard his shrine in Srinagar. Nobody reads Abdullah’s autobiography, Flames of the Chinar.

Informed and sympathetic biographers must locate ‘the lion of Kashmir’ in Kashmir’s struggle for freedom against the repressive Dogra raj. Ajit Bhattacharjea has done just that. In the 1930s and 1940s, we hear Abdullah thundering at a doomed social order and an economic system resting on inequity, injustice and exploitation. Without being a firebrand revolutionary, he worked the system as a consummate behind-the-scenes insider who influenced everyday events through connections and friendships. Nehru, the future prime minister of free India, was probably his best friend...