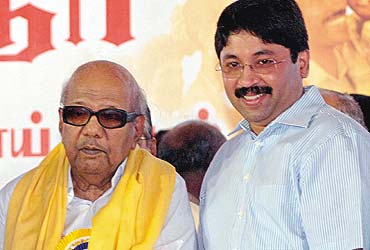 outlookindia.com
-0001-11-30T00:00:00+05:53
Time was when the Dravida Munnetra Kazhagam (DMK) worker believed in the slogan Kazhagame kudumbam (the party is family). Today, it is The Family which is the party. It may appear that DMK president and Tamil Nadu chief minister Muthuvel Karunanidhi, 83, has emerged unscathed from a bitter family feud that many fear will have far-reaching implications for a party he has nurtured for decades. In fact, according to insiders, the Dravidian patriarch, who despite his avowed atheism has a penchant for allusions to Hindu mythology, today finds himself in a Dhritarashtra-like position, presiding over a battle between brothers, a half-sister and cousins. This heady tale of intrigue, conspiracy, manipulation and betrayal is indeed Mahabharat-like.

Lined up on one side of the chessboard is Karunanidhi's immediate family—sons M.K. Stalin, M.K. Azhagiri and now daughter Kanimozhi. Pitted against them are the grandnephews of the CM—Kalanidhi and Dayanidhi Maran. All along, the two arms of the first family were spoken of in the same breath....