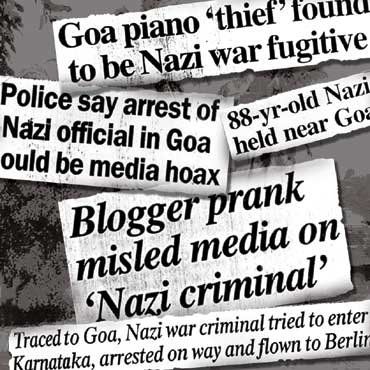 outlookindia.com
-0001-11-30T00:00:00+05:53
With rising EMIs, a tanking Sensex and excruciating negotiations over the nuclear deal, we needed something to laugh about this week. As if on cue, several newspapers, including respected names in Indian journalism like The Indian Express, Asian Age, Deccan Herald and The Telegraph, unwittingly obliged by falling for a bloggers' prank, and front-paging or prominently displaying a story so full of nonsense-names that it could have been written by Lewis Carroll or Dr Seuss.

Penpricks, a Goa-based group of bloggers with a reputation for taking on the media, has posted a hilarious account (penpricks. blogspot.com) of how it cooked up and sold to the media its improbable story about an 88-year-old German Nazi musician called Johann Bach hiding in Goa with nothing smaller than a priceless 18th-century grand piano. With the help of Google Images, Yahoo Babel software and Microsoft Word Art, it manufactured a press release embellished with official-looking logos, German words like Pressekommuniqua and Unterschrift, and a picture of an...